A de-aged Paul McCartney is here to dance through your nightmares in the new video for Beck’s version of “Find My Way.”

The track appeared on McCartney III Imagined, a collection of heavy-hitting covers of tracks from the master’s latest album McCartney III. With “Find My Way,” Beck transformed a rock tune that could have come from any decade into a disco funk banger, with off-kilter percussion that transported Macca back to the groovy music of his youth.

The new video, directed by Andrew Donoho, makes that metaphorical time travel literal. The clip opens in a hotel hallway painted in two once-popular shades of burnt orange. The door at the end experiences a few violent flashes of light, after which who should appear but Paul McCartney, looking less like the 79-year-old he currently is and more like he’s ready to take the Ed Sullivan stage.

This digital avatar was created by Hyperreal Digital, a company that skirts the edges of the Uncanny Valley to fool the eye. “The technology to de-age talent and have them perform in creative environments like this is now fully-realized, even with one of the most recognized faces in the world,” said Hyperreal’s CEO Remington Scott in a statement.

Donoho leans into the feeling of a time warp, and his version of McCartney keeps opening new doors only to emerge in the same hallway. Rather than getting frustrated, he merely wiggles and spins through the slowly changing hotel, watching as plants sprout out of the floor, or the walls begin to breathe as if the shrooms are kicking in. Eventually, this computerized McCartney melts into the walls, and each movement of his arms sends rippling swirls across the screen. The video ends with McCartney tearing off his face to reveal that it was Beck all along. Yeah, it’s super creepy, but also pretty fun.

Check out the visuals for “Find My Way” below. The video comes ahead of the physical release of McCartney III Imagined on July 23rd;vinyl, CD, and cassette pre-orders are available via Capitol Records. 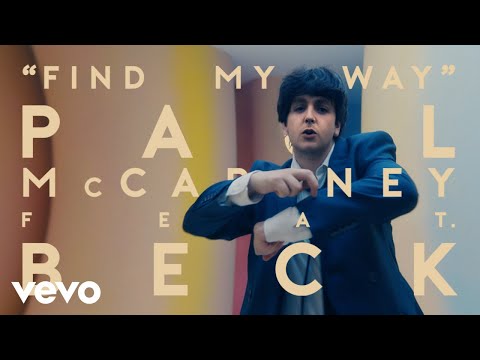 De-Aged Paul McCartney Will Haunt Your Dreams in Video for Beck's Cover of "Find My Way": Watch