Space rockers Spiritualized have announced the new reissue of their seminal album, Ladies and Gentlemen We Are Floating In Space, will be out September 10th via Fat Possum Records.

Serving as the third stage of Spiritualized’s previously announced Spaceman Reissue Program, the new edition of 1997’s Ladies and Gentlemen is a double LP pressed onto sturdy 180g vinyl. It is mastered by Alchemy Mastering and presented in a gatefold jacket with reworked artwork by Mark Farrow.

Ladies and Gentlemen is often cited as Spiritualized’s best work. It also marked Kate Radley’s last album as a member of the band and featured contributions from Dr. John, the London Community Gospel Choir, and B.J Cole. Its title is taken from a passage in Joystein Gaarder’s novel, Sophie’s World, where a young girl attempts to define the meaning of life by traveling through time and space while meeting the world’s great philosophers.

Spiritualized mastermind Jason Pierce, aka J. Spaceman, recalled the making of the album in a statement:

“We went out to America ahead of recording this record. John [Coxon] had joined on guitar and I’d recorded the title track and a number of other demos that ended up on the finished record.

But we got to play ‘Cop Shoot Cop’ and ‘Electricity’ live and to work them out before we recorded them for the record and then John became integral to the band. He came from a world of Syl Johnson and Al Green, Teenie Hodges, and Reggie Young; a different world within the guitar lines. And then there was Kate [Radley]’s hugely influential keyboard that was relentless and loud.”

Pierce continued by explaining how he convinced Dr. John to play on the record. “With Dr. John, I just wrote a letter, sent the track and his response was immediate,” he recalled. “He said, ‘Absolutely, absolutely, love it.’ It was where he wanted to be. I was completely in awe of him and his playing and everything he put to it. I could hardly speak, to be honest. Not that I needed to speak much. It didn’t add anything little or less to the proceedings. It was an amazing session, amazing to do.”

Back in February, Pierce announced the band would be reissuing their first four albums. 1992’s Lazer Guided Melodies led the way on April 23rd and was followed by 1995’s Pure Phase. Closing out the program will be the reissue of 2001’s Let It Come Down.

Ladies and Gentlemen We Are Floating In Space pre-orders are available at Spiritualized’s website, where the reissue is available in both a standard black vinyl pressing and limited edition Neptune-blue vinyl.

Spiritualized’s most recent LP was 2018’s And Nothing Hurt, which was one our 100 favorite albums of the 2010s.

Ladies and Gentlemen We Are Floating In Space Artwork: 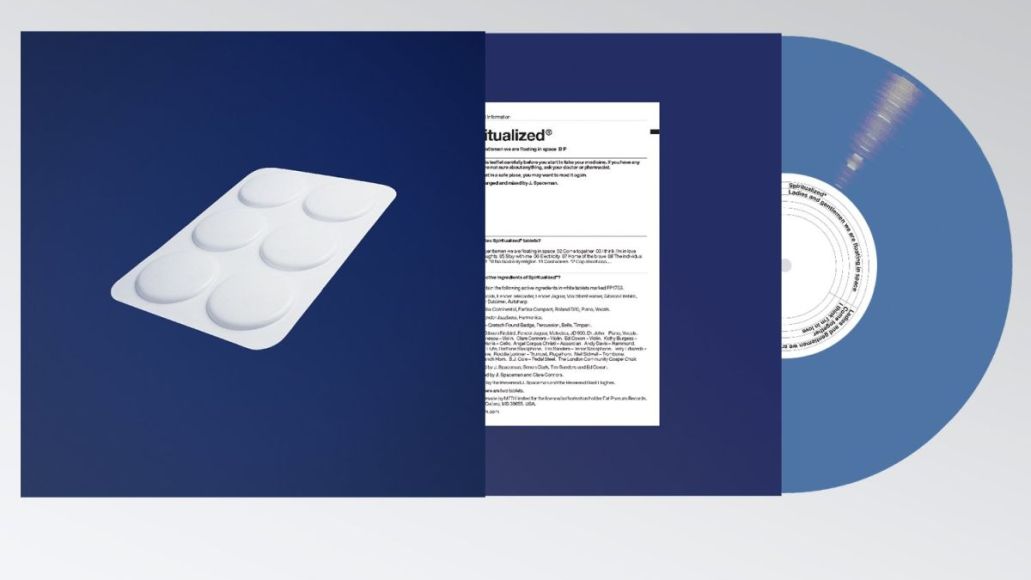 Spiritualized Detail Ladies And Gentleman We Are Floating In Space Reissue