The Pitch: The original 1969 Woodstock has a deeply romanticized place in the cultural consciousness — the ultimate fairyland of peace, love and understanding, where some of the best rock and folk artists gathered for a once-in-a-lifetime expression of the peacenik hippie ethos.

In an attempt to recapture that magic (the kind that, admittedly, comes through rose-colored glasses), co-founder Michael Lang set up another fest in upstate New York in 1999. Rather than good vibes and great oldies, though, Lang shot straight for the white-boy demographic, getting the biggest hip-hop nu-metal, and rap-rock acts of the time (Korn, Metallica, Kid Rock, Rage Against the Machine) together for a three-day weekend of rock, revelry, and fun.

But by the time Sunday rolled around, Woodstock ’99 became a litmus test for how well late ’90s American culture could handle the kind of idealized bacchanal the fest’s reputation promised. Throngs of shirtless festivalgoers eventually devolved into looting, property destruction, and even sexual assault. One man died of heat exhaustion. It was a social experiment gone horribly wrong, Lord of the Flies set to aggressive bursts of rap-rock.

But what exactly happened? HBO’s new documentary Woodstock ’99: Peace, Love, & Rage sets out to answer that question — and use the fest’s failure as a case study for the state of Y2K-era American angst, male toxicity, the music industry, and the naïveté of nostalgia. 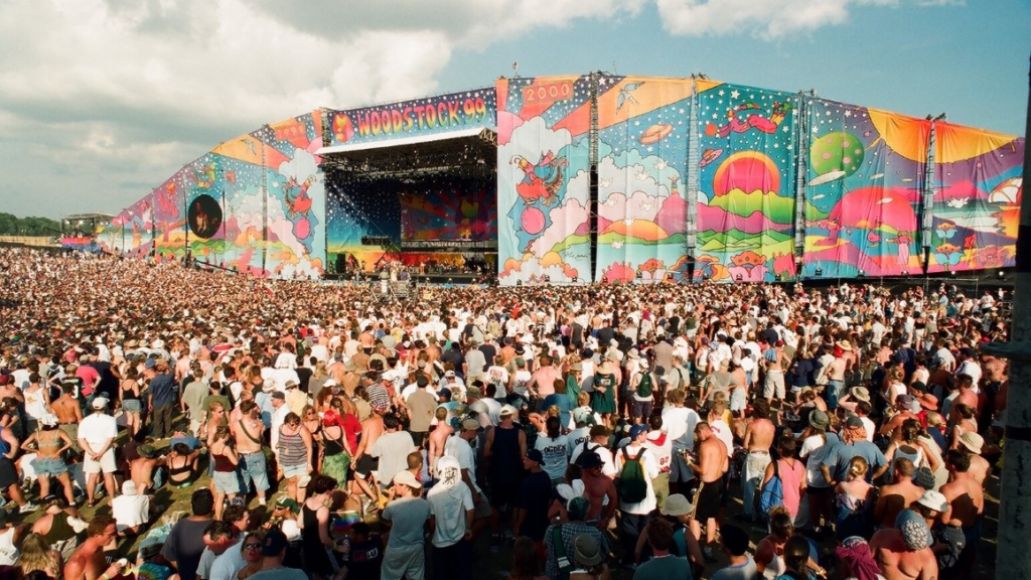 Isn’t It Ironic? While the Fyre Festival was infamous for its crowded venue, poor infrastructure, and slowly devolving sense of social order, Woodstock ’99 feels like the OG version of that kind of entertainment trainwreck. The difference was, of course, we couldn’t watch it unfold in real time — it was an age before smartphones and social media, where we got our music news from MTV rather than Twitter. Instead, director Garret Price (Love, Antosha) goes old-school with his forensic approach to dissecting the fest, cobbling together an engrossing mixture of archival footage, talking-head interviews, and re-enacted journal entries from one fateful attendee to chart the slow-moving train wreck the fest turned out to be.

Right from the get-go, Price makes his thesis clear, situating the festival in the end-of-history milieu of the ’90s. It was the age of Y2K, when Napster was king and MTV moved from grunge to boy bands. And in the middle of it all, there was Woodstock ’99, naively trying to evoke the nostalgia of the ’60s event to a generation who knew nothing.

Ask Lang, or fest promoter John Scher (who comes off as defensive and victim-blamey in both past and present), and they were trying to do a contemporary version of the nirvana they felt had happened in ’69. Problem was, the acts weren’t Creedence Clearwater Revival or Jimi Hendrix: they were Korn and ICP and Kid Rock. While I must stress that most fans of these artists are, I’m sure, fine people, the thrashing, angsty rap-rock aggression only fanned the flames of a drugged-up crowd of disaffected frat boys looking to start shit.

It’s like watching a doc on the War Boys from Fury Road before they put their makeup on: gaunt, grinning, shirtless throngs in thrall to the basest impulses their culture has instilled in them. And no amount of half-hearted calls to “stop groping folks” from The Offspring’s Dexter Holland was going to stop a sea of white dudes all too happy to play out their Girls Gone Wild fantasies on impressionable young girls who just went to have a good time. Before long, even the musical acts knew something was wrong, and started looking for the exits at the earliest possible opportunity. 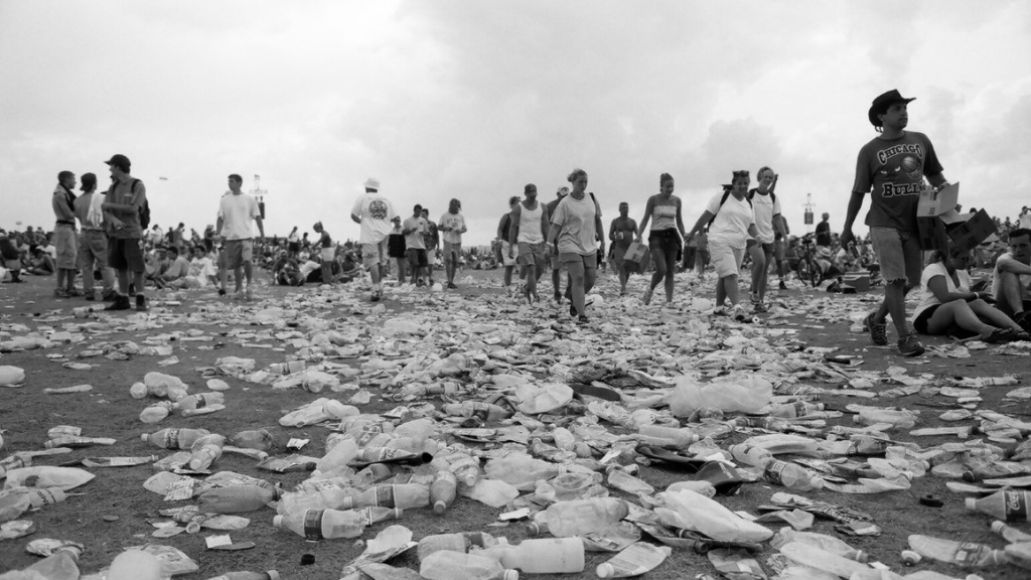 Peace Sells, But Who’s Buying? As the doc goes on, Price gradually sinks the knife deeper and twists it, each new development turning your stomach. The abandoned airbase on which Woodstock was staged (oh, the irony) was hot, muggy, and ill-equipped for so many people; crowds bristled at $4 bottles of water and long lines for Porta-Potties that were so backed up they spilled sewage out into the bottle-littered lot.

Gleeful kids would roll around in mud, not realizing (or caring) that it was probably also shit. As Price ushers us chronologically through the fest, press conferences become bitter shouting matches (Scher shouts back at a journalist complaining about the mess, “Don’t criticize, help!”). With every new detail, the literal shit show the fest would become becomes heart-stoppingly clearer, and Price plays each of these moments for all they’re worth.

Blame It On the Nu Guy: But for as compelling a case as Price et al. make for Woodstock ’99’s failures — a combination of naive, ill-prepared organizers, crowds of angry young white men looking to break shit, and the artists who egged them on — Peace, Love, & Rage lays its points on a little thickly. To hear the attendees and artists tell it, Woodstock ’99 was essentially a petri dish of toxic masculinity, a collective expression of white male angst of a similar type as the Columbine shooters (which had just happened months prior).

Fred Durst shouts to the crowd to “Break Stuff,” they start breaking stuff; dudes shout at Rosie Perez to show them her tits; candles handed out for a nighttime vigil for victims of school shootings are used to practically burn down the stages. By the time Sunday rolls around, jackasses in cargo shorts are kicking down a wall that says “Peace and Love” because they were bored.

Admittedly, some of the details of that narrative are in dispute, especially the idea that it was Fred Durst’s fault that people rioted on Saturday night (and that rioting happened on Saturday at all). Yet, the case being made is certainly compelling, if a little repetitive: where the ’69 Woodstock was an expression of free love in protest of Vietnam and civil rights, Woodstock ’99, they argue, was the hedonistic, capital-drive fantasy of a fratty rape culture, one with all the privilege in the world but a surfeit of anger for which there was no outlet. (Living in the now of 2021, where that kind of white male rage is channeled into alt-right groups and racist 4chan boards, Woodstock ’99 does feel like a coming-out party for a particularly noxious generation of dudes.)

The problem comes when Price’s thesis statement becomes too overblown, teetering right on the edge of blaming the musical acts themselves for fomenting the riots and violence at the fest. Nu metal becomes a convenient scapegoat for the downfall of the fest — because these bands attracted these people, that’s why the festival fell apart. Fight Club and The Matrix are rolled in as examples of the kind of art that marketed young boys’ own anger right back at them, which feels a reductive reading of what are pretty satirical deconstructions of that same anger.

Conversations on the impact and influence of media on our psyches, and what we should do about it, are always highly charged, and Woodstock ’99 tips frustratingly in the direction of laying the blame on nu-metal as a genre. And yet, it does encapsulate the innate toxicity of late-’90s pop culture that bubbled right below the surface of an unprecedented level of growth and prosperity for America. “We wanted to do something contemporary,” admits Lang on ’99’s rap-rock lineup. “And that was what contemporary was.”

The Verdict: Introducing the doc as part of HBO’s Music Box doc series, Price notes that it would be easy to paint Woodstock ’99 as a comedy, but “it turned out much more like a horror film.” So goes the doc itself, channeling its grainy VHS footage into something of a Blair Witch Project populated by chortling teen chuckleheads who were too into backyard wrestling.

It’s a little overstuffed, as Price succumbs too greedily to the temptation to point to W99 and say broadly, “This is what’s wrong with America!” But as a case study for the confluence of white millennial entitlement and Boomer nostalgia, it’s certainly gripping, a disaster movie in documentary form. Watch this and either of the Fyre Fest documentaries at your own peril; you might just lose what little hope for America you have left.

Where’s It Playing? Woodstock ’99: Peace, Love, & Rage crawls through rivers of piss and shit to tell its dark story on HBO July 23rd. 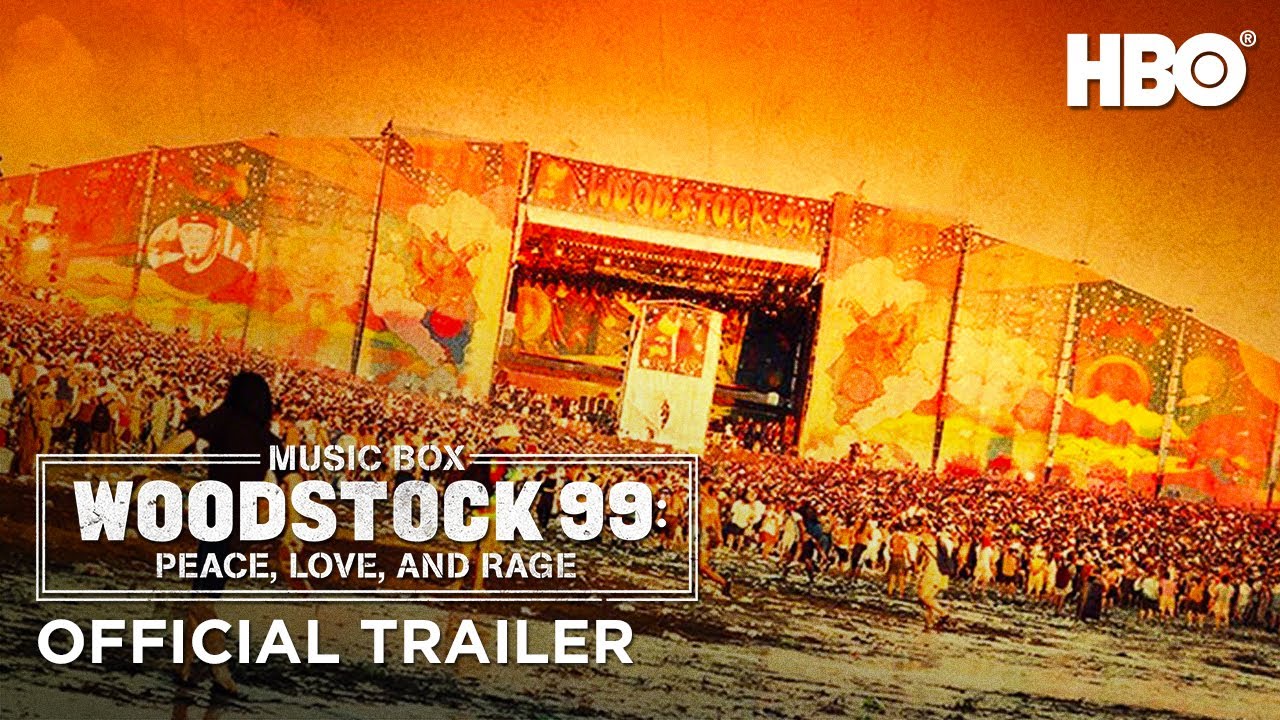