For someone who named her upcoming album Sometimes I Might Be Introvert, Little Simz has been awfully sociable as of late. She recently made her US TV debut on Fallon, and now she’s brought a whole houseparty’s worth of guests to her performance for the Tiny Desk (Home) Concert series.

The set spanned recent singles and the previously unheard track “Point and Kill,” and took place on what appeared to be a soundstage dressed with a tan carpet, green furniture and plants, and a burgundy leather couch. Simz was surrounded by friends and collaborators, so that every camera angle overflowed with her fellow artists.

The rapper opened with “Introvert,” which segued into “I Love You, I Hate You,” a song that she said required her to “dig deep, and dig somewhere that is very uncomfortable. But I think it made for a positive result.” Afterwards, she debuted the new song “Point and Kill,” a swanky Afrobeat bop which featured Nigerian-British artist Obongjayar. Little Simz closed the Tiny Desk Concert with “Woman,” which she dedicated to her mother. Check out the performance below.

Sometimes I Might Be Introvert arrives this Friday, September 3rd, and pre-orders are ongoing. In addition to the previously mentioned songs, Little Simz dropped the single “Rollin Stone.” 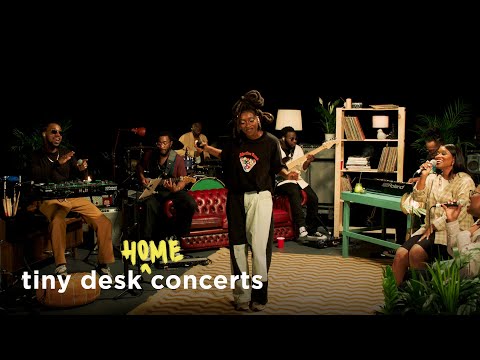