Working exclusively in collaboration with Interscope Records, Electronic Arts curated a roster of exclusive songs from upcoming Interscope talent to showcase “rising stars for the next generation of players” including the likes of Swae Lee, Jack Harlow, Tank and the Bangas, JID, and Tierra Whack.

“I’ve had a long relationship with EA SPORTS and I’m excited to release my new song, ‘Ball is Life’ with Jack Harlow, on The Madden NFL 22 Soundtrack,” Swae Lee said in a statement.

Madden NFL 22 will also involve more than 50 additional tracks in a new mode called The Yard. Fans can hear new tracks from Killer Mike, Leikeli47 and Coi Leray, along with cuts by Drake, J. Cole featuring Lil Baby, 24kGold both in The Yard and throughout the game, and you can find the full Madden NFL 22 Soundtrack Spotify Playlist here.

Ahead of the soundtrack’s surprise release, Consequence spoke with Steve Schnur, worldwide executive and president of EA’s music division, to hear about how the project came together, and why Madden ’22 is an “epic opus of modern hip-hop.”

Check out the interview and stream the Madden NFL ’22 soundtrack below.

Why was now the right time to create the first-ever Madden soundtrack album from EA SPORTS?

While we believe every Madden soundtrack is an event in its own right, this year’s edition is all about firsts on several levels. Bottom line, it’s a radical new approach that warranted an official album release.

What’s the inspiration behind the Madden NFL ’22 soundtrack?

Certainly, our annual objective is to enhance the Madden experience by curating the sound of the coming season. But this year we wanted to take Madden music even further. For the first time, there are two entirely separate soundtracks. With 65 total songs — almost double previous editions — it’s the largest collection of music in Madden ever. And when it came to our Menus soundtrack, it opened the door to an unprecedented opportunity to partner with the most vital label in hip-hop today.

How did Interscope get involved? What made them the right label to collaborate with?

Because Interscope is the most forward-thinking, risk-taking, big-picture-seeing hip-hop label in the industry, we proposed a partnership unlike anything that has been done before — not only in Madden, but in gaming itself: One label. One select group of artists creating exclusive songs. One Madden NFL soundtrack to change the game like never before.

How did you select the artists featured?

Interscope’s hip-hop roster includes so many of the defining talents in current hip-hop. And we knew that the artists we selected to work with — 42 Dugg, Belly & Shenseea, BRS Kash, JID, Moneybagg Yo ft Tripstar, Morray, Sally Sossa, Swae Lee ft. Jack Harlow, Tierra Whack, and YSB Tril — would drive the attitude, push the sound, and take Madden music to a whole new level.

Were the artists asked to create their songs around a certain theme? How involved was EA in the custom song process?

Certainly, we’ve worked with artists on custom tracks in the past, but this was another approach entirely. We hand-in-hand collaborated with Interscope and the artists to create 11 custom songs from scratch, writing, rewriting and making sure the songs reflected the artist’s own distinct style while fitting — and elevating — the Madden vibe. Together, we brought their A-game to our game.

How will the soundtrack be integrated into the overall game?

Like songs curated for a major film, the 11 Menu tracks — which also feature additional non-Interscope artists Moe, Kidd Kenn, Hit Boy ft. Big Sean & Fivio Foreign, and Tank and the Bangas — comprise a cohesive soundtrack that exists in its own world. For the first time, it will be released as an album rather than a playlist, with Madden ’22 listed as the artist.

The other radical half of Madden ’22 is “The Yard,” featuring 50-plus gritty tracks that speak directly to — and absolutely deepen — this mode’s unique street vibe. The artists in “The Yard” — ranging from Drake, Future and Killer Mike to Morray, BROCKHAMPTON and Coi Leray — represent the cream of the crop from major labels and independents alike. Individually, either of these mode soundtracks would be unprecedented. Together, Madden ’22 is an epic opus of modern hip-hop. 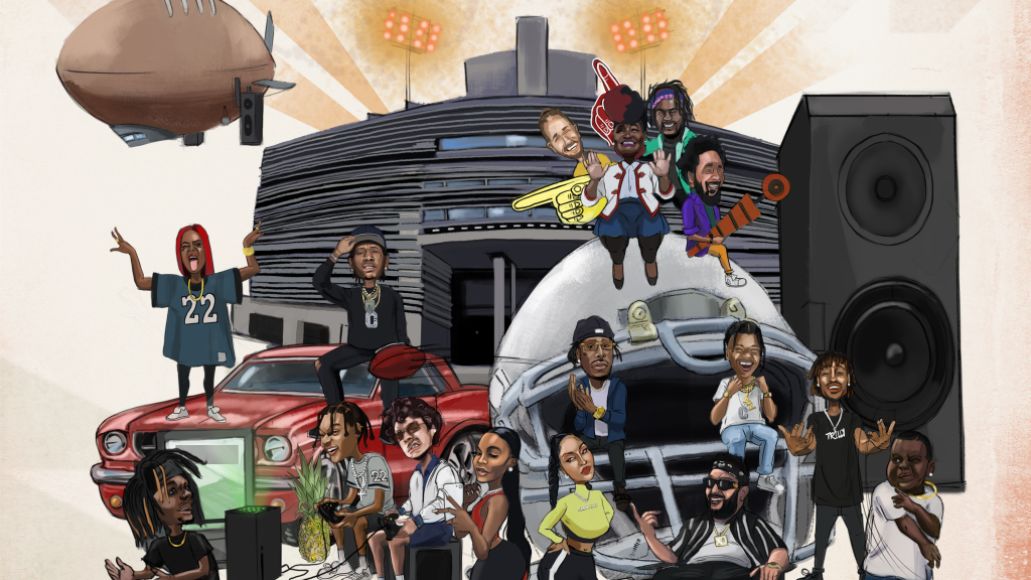