In our Track by Track feature, musicians are presented with the chance to share the stories and inspirations behind each song on their latest album. Today, Shannon and the Clams welcome us to Year of the Spider.

Shannon and the Clams are back today with their sixth full-length album, Year of the Spider. Arriving via Easy Eye Sound and produced by the label’s own Dan Auerbach, the entire LP is available to stream below, followed by the band’s Track by Track breakdown of the effort.

The follow-up 2018’s Onion is the product of many years of tragedy. There was the devastating 2016 Ghost Ship warehouse fire in The Clams’ Oakland hometown, the 2018 California wildfires that threatened Shannon Shaw’s family’s home, the 2019 stalking incident that forced Shaw out of her apartment after 14 years, her father’s brush with cancer, and the death of The Clams’ former drummer Mick. Even the mixing sessions were marked by negativity, with guitarist/vocalist Cody Blanchard finishing the record at Easy Eye Sound studio as tornadoes ravished Nashville and COVID-19 lurked around the corner.

Yet despite — or because — of all this, Year of the Spider is all about not just persevering through adversity, but thriving. With the material split between Shaw and Blanchard on lead, early singles like “Midnight Wine” and the title track have shown the band has come out the other end stronger than ever. Now, you can see how else Shannon and the Clams survived the Year of the Spider by streaming the album below and reading all about it in our latest Track by Track feature.

You can also catch The Clams on the road this fall, with tickets available via Ticketmaster or the secondary market.

“Do I Wanna Stay”:
This song was the first I started writing for this album. I wrote it driving aimlessly through my hometown of Napa in between big tours. I had so much on my mind at the time, so many big decisions to make, one of them being moving. Should I leave the place where I became ‘me’? Where I have friends, support system, family, cheap rent? Where I have a peeping Tom? Air thick with smoke from forest fires threatening my childhood home? Or do I try a fresh start, join my boyfriend up north and work on the next steps in life and grow into the unknown? This decision was so hard to make and plagued me for months and months and months. A lot was on my mind. I wanted this song to have tons of space and feel like a horse climbing a mountain into unknown darkness. I didn’t want drums and I wanted the song to have a bizarre cheesy outro. I’m glad Nate talked me into drums and Will came up with that lovely piano that follows me around in the song. — Shannon Shaw

“All of My Cryin’”:
I wrote this one a year or two before we started working on Year of the Spider and I wasn’t sure it would be a Clams track. I was deep into Stylistics and Bee Gees and ABBA at the time and wanted to make a dark desperate disco song. I wasn’t sure if it was gonna work, but as soon as we rehearsed and got Shannon’s fuzz bass and Will’s droning organ sound, it came together like magic. It’s about having your spirit crushed as a little boy by adult masculine pressure, taking your first doses of emotionally-crippling poison. This one is gonna take a lot of work for us to get right for live shows; it’s so different from our usual modes. — Cody Blanchard

“Midnight Wine”:
This was originally written as a kind of haunted acoustic finger-style Appalachian murder ballad. But I wanted to have something more fun to play live and this band so rarely gets to ROCK HARD so I tried it in a few different styles and landed on this kind of glam/psych/metal arrangement. What I really wanted was like a dark, negative take on “Spirit in the Sky” by Norman Greenbaum, so rather than droning acoustic fingerpicking, we have this droning fuzzy guitar chug, but we kept the kind of Appalachian vocal harmony. This one has become a band favorite to perform, it’s so satisfying. It’s about drug addiction and suicide and death and what leads there. Specifically friends I’ve had over the years who just could not make it work in American society and became so disheartened and disillusioned with the culture here that their only recourse was to get high until they didn’t care whether they lived or died. It’s truly heart-wrenching to witness. I made up a fictional drug or drug slang “midnight wine” because I didn’t want to be too obvious or on-the-nose with talking about booze or heroin. — C.B.

“I Need You Bad”:
I also wrote this long before we started Spider and didn’t know if it was a Clams track. It comes off like a romantic song, but it’s about how badly you need your shadow — shadow integration. It’s a Jungian concept about accepting your dark impulses and being curious about them, rather than blindly repressing them. Musically I wanted to blend glam and T-Rex with Motown and soul harmonies. I think we did it. — C.B.

“Year of the Spider”:
This song encapsulates the struggles of 2019-2020 for me. It’s about wrangling big fears and making them your source of power. — S.S.

“In The Hills, in the Pines”:
At some point in the last few years I got really sick of the up-front electric guitar sound and the full band rock and roll sound and all I wanted to play was synthesizer and acoustic guitar. I wanted to veer off-trail from my default Clams songwriting scaffolding. So I wrote this one. It’s about watching my social circle in the San Francisco Bay Area totally collapse and fracture and watching the parts of the city that I knew just get culturally upturned and gutted and hollowed out by commercial interest and real estate etc. — C.B.

“Godstone”:
While on the first vacation I’ve had in my adult life in Hawaii, I got my mind blown underwater. I was snorkeling in Maui and a massive sea turtle swam past me. I followed it for 30 or so minutes just taking in its majesty while also exploring coral that started to look like cities to me with fish swimming up different highways etc. Suddenly I heard a wild scream under water that I felt shock through my entire body. I even felt it in my hair and nails! I popped out of the water to see what it was and I saw nothing but a cluster of people on shore starting at me. I was told there were three whales a few feet from me so the scream must have been a whale song! I was so stunned that I didn’t notice them while on my turtle quest but felt an overwhelming magical high and wrote a song about it. It felt so cool to realize my smallness and insignificance in this other world. It’s surprisingly literal. — S.S.

“Snakes Crawl”:
We’ve never had a dirge-y quiet creeper like this in our repertoire and I’ve always wanted to. I’ve been really attracted to spooky haunted old Appalachian folk songs the last few years and I wanted to do something like that. It kind of became a band favorite to play during rehearsal. It’s about the limits of freedom of choice and being unable to resist the gravity of a charming but doomed relationship, whether it’s romantic, business, collaborative, whatever. It’s easy to fall under the spell of first impressions and then get stuck in a habitual co-dependent relationship that is ultimately doomed because of key personality conflicts that can hide under charm and excitement. I recall Dan being really hyped on this song and saying that I must be proud of it. He’s a major songwriting fanatic and loves a well-crafted song. I also recall him saying that this is definitely not a single, haha. I agree. — C.B. 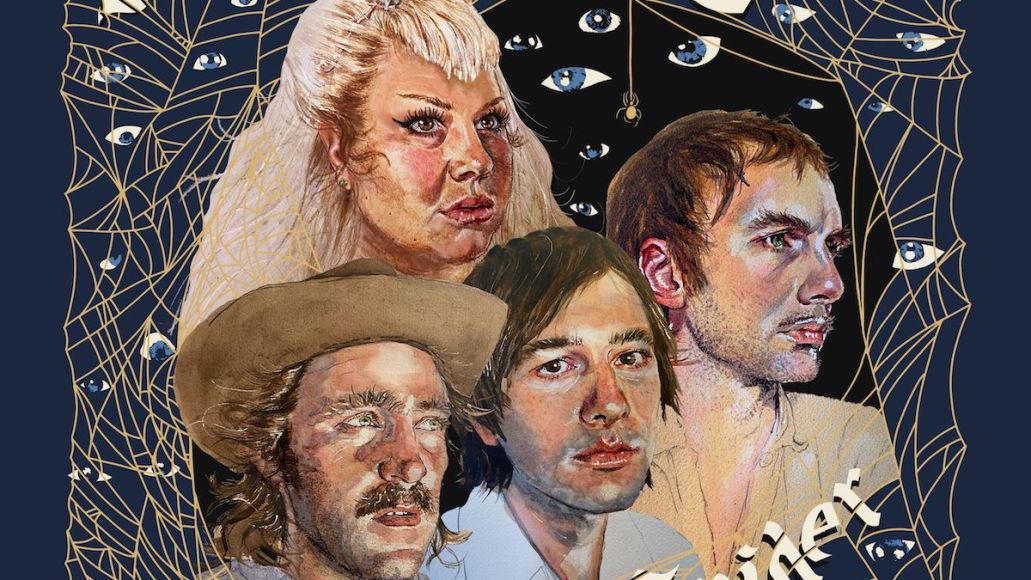 “Mary, Don’t Go”:
My beloved roommate and best buddy made the hard decision to move my from my Oakland house. The peeper was too much for us to handle and she too needed a fresh start. Basically an ode to someone very special in my life who deserves all the love in the world. I love the opening lick Will came up with on this tune. My mind doesn’t think in licks and I love it. Working on the drum beats for this in the chorus was fun for me but I bet I was a pain in the ass for sweet Nate! I had a crystal clear idea of what I wanted for the fills but I could not explain them with human words! Luckily Nate is hella patient and played along with me till we got it down. — S.S.

“Leaves Fall Again”:
The madness and monotony of the seasons changing every year. A mixture of the exhaustion of knowing what to expect as well as reminder that the world keeps turning. Will’s falsetto is impressive in the opening and closing of this tune. — S.S.

“Flowers Will Return”:
This really seemed like a doomed track that we couldn’t get right, but it had some magic that we all loved and we kept coming back to it. We rearranged it dozens of times and I kept changing the lyrics. Finally, just before we were going to record it, Dan jumped in and totally transformed it, slowed it down, chopped it up, and it came out like this. The chorus lyric I eventually landed on was, “Leaves die in their turn/ As each love ends we learn/ That flowers will return.” But we simplified it to its essence as I was doing the vocal in the studio and I think the point still comes across. A handful of people have pointed to this song as a favorite I think because the COVID pandemic is such an incredibly dark time and they just want someone to yell at them “flowers will return” over and over as a hopeful message. — C.B.

“Crawl”:
I only had the verse for this song, which I LOVED and a few chorus ideas that didn’t work; they were too big, too dramatic. So we got together and jammed on it and Will swooped in like a heroic winged demon on keyboard and spontaneously built this kind of Afro-Psych riff reminiscent of Witch or Chrissy Zebby Tembo, and that became the chorus. I love it. I wrote this about an old childhood friend of mine whose mom died suddenly in my parents’ kitchen in 2019. It’s not really clear from the lyrics after we cut the song down. I think I had two or three more verses that got cut. — C.B.

Shannon and the Clams Break Down New Album Year of the Spider Track by Track: Exclusive