Attending a three-day music festival may be the last thing on many folks’ minds while in the midst of a pandemic, but after an intense year of quarantine, a bit of positivity is just what we all need right about now. The Life Is Beautiful Music & Art Festival made its epic return to Downtown Las Vegas over the September 17th-19th weekend after a year off, and reconfirmed that humanity still exists.

The 2021 festival showcased a load of familiar artists such as Brittany Howard, Megan Thee Stallion, Tame Impala and Green Day. There were a few emerging faces in the mix, too, as acts like SHAED and Amy Allen warmed up the crowds.

The fest has been around about eight years, and like a fine wine, it only gets better with time. From massive art installations to a Bacardi Art Motel dedicated to obtaining the perfect photo while listening to house music, Life is Beautiful is an all-encompassing festival that goes beyond the music. This year proved to be no different; taking over Downtown Las Vegas and spanning over 18 blocks, the event returned without missing a beat.

Overall, the vibrant atmosphere at this year’s fest was a perfect reminder that not all is lost. If you weren’t able to make it out — or maybe you were at Chicago’s Riot Fest instead– here’s our recap of what you missed.

Brittany Howard Took the Crowd on an Emotional Journey

Brittany Howard is an artist that needs no introduction; however, I’ll oblige. The frontwoman for Alabama Shakes has stepped out on her own — and for good reason. With pipes that toggle between burly and tender, Howard is an artist that’s working to single-handedly resuscitate American rock and roll by infusing the genre with blues.

The sound system never does Howard justice, but at Life is Beautiful, she commanded the stage nonetheless while belting hits from her debut solo album Jamie, in honor of her late sister. Near the end of her set, crowd favorite “Goat Head” sent the audience into tears. Howard always takes her audience on an heart-wrenching journey, and although her set can be a bit emotionally draining, it’s worth it.

“Willow! Willow! Willow!” could be heard for miles prior to the young rocker taking the stage. The singer set the stage ablaze with her wide vocal range, along with plenty of guitar ripping moments. The 20-year-old reminded her followers that rock is still relevant, but also took time to open up and remind the audience that “life truly is beautiful.”

At one point in the evening, Willow requested that the audience chant a mantra along with her to reinforce the message of love and acceptance. “[Let’s do a] call-and-response thing, where I say, ‘I am love,’ and you repeat that back to me,” Willow said. “We create love together. We are love!” Hanging on her every word by a thin string, it’s evident that the audience craved this energy.

Just when you thought Vegas couldn’t get any hotter, night one headliner Megan Thee Stallion brought Hot Girl Summer to Sin City and turned out the entire crowd. “Y’all ready to turn the fuck up?!” she shouted before hopping into “Freak Nasty” from her 2018 album Tina Snow.

The original Houston Hottie has a stage presence that is undeniable. Megan’s authenticity, wit-infused raw lyricism, and execution are what make her one of the top female rappers to date. Let’s be honest: she obliterates any beat she encounters with ease, and also has a solid track record when it comes to putting out bangers.

“If you a real hottie let me hear you say, ‘Real hot girl shit!” Megan yelled at one point. The signature statement echoed through the crowd, which overflowed into the streets surrounding the stage. She effortlessly flew through her sexcapade lyrics of “Captain Hook,” and also took it back for the hotties who were there since day one with “Big Ol Freak.”

The high-energy set is just what festival-goers needed to set the tone for the weekend. Megan Thee Stallion understood the assignment and delivered on all fronts. 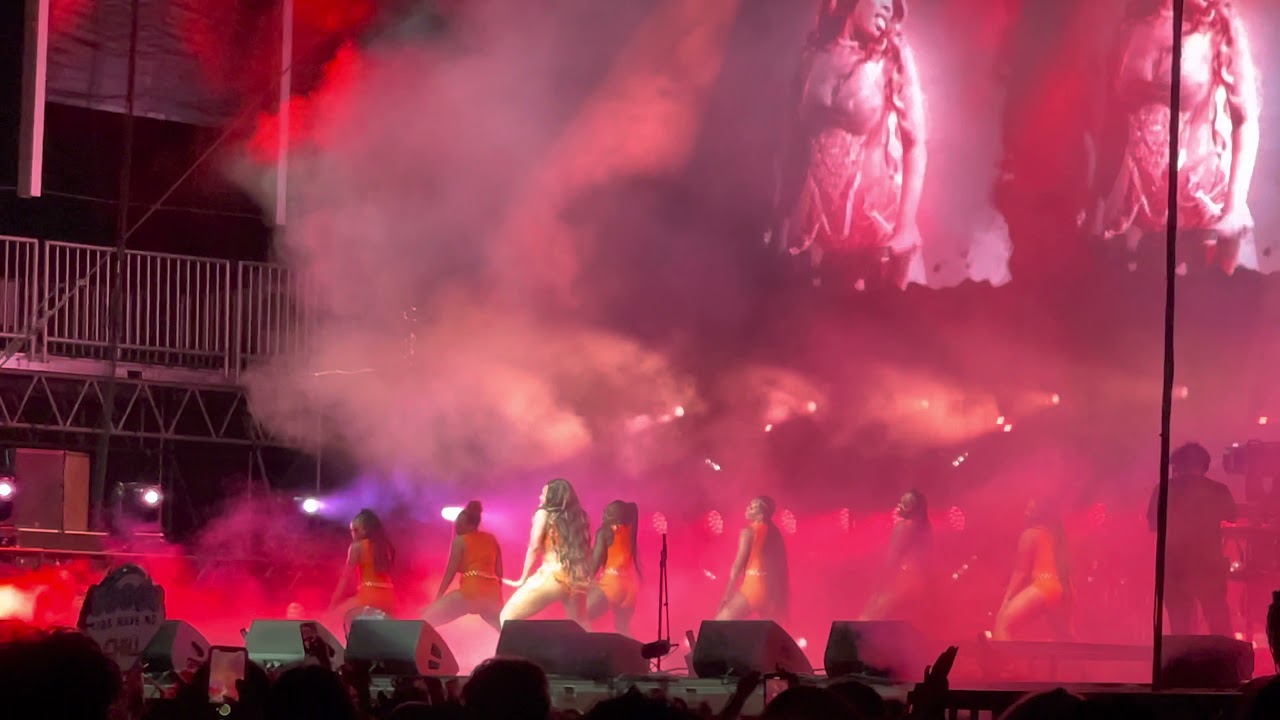 Pop-rapper, and TikTok star Ashnikko took over the Barcadi stage during night one of the festival. Sporting her signature blue hair, Ashnikko put on the performance we didn’t know we needed. Playing singles from her 2019 Hi, it’s Me EP such as “Working Bitch,” the singer pranced, straddled, and owned the stage in every way, but not without a few sniffles and coughs in between. “It’s not COVID,” the artist quipped. “But it’s hard dealing with it.”

Five years could go by and a Modest Mouse set would remain the same. Modest Mouse plays on consistency, but it’s a safe bet and festival-goers know what to expect. Frontman Isaac Brock guided the crowd through hit after hit, though it wasn’t until they reached their breakout, “Float On,” that the crowd became involved. From that point on, the audience did their best to duet with Brock and make themselves heard.

Green Day Did it For the ’90s Kids

Seeing Green Day live is like taking a step back to the ‘90s — a time where nothing really mattered, except the music. Thousands of fans took to the streets for their set late on Saturday evening, which served as their first festival gig following the just-adjourned Hella Mega stadium tour. Green Day is one of those bands where you don’t think you know every song, until you see them live. For their part, the Life Is Beautiful crowd yelled along to hits like “American Idiot,” “Basket Case” and the seasonally-appropriate “Wake Me Up When September Ends.”

Alas, not everything about the fest was Beautiful. Atlanta native Young Thug was more than 30 minutes late to his set, which left fans irritated and anxiously shuffling around to reschedule and make adjustments. Many were hopeful that the rapper would make it up to his loyal fans, but the disappointment continued as they were met with a lackluster DJ who did his best to please anxious fans.

When he did arrive, Young Thug stumbled through the lyrics and fought to speak over technical difficulties, such as the speakers going out. Needless to say, this wasn’t his best performance by any means.

A$AP obviously had to ditch the ERL rule-breaking quilt he donned at the Met Gala for something more suitable for the final day of the festival. The Harlem native took over the Barcardi stage with a set that lasted about 40 minutes. Although he was short about 25 minutes, fans were understanding, as there wasn’t a single miss throughout the set. Meanwhile, A$AP did his best to connect and interact with the audience, encouraging them to form huge mosh pits — a demand that the audience was happy to meet.

A$AP was also on his best behavior for girlfriend Rihanna, who was watching from the pit. At one point, they blew each other kisses. Cute!

Similar to watching a caterpillar turn into a butterfly, seeing the evolution of Billie Eilish from 2019 (when she last performed at Life Is Beautiful) to 2021 (where she returned as a much-deserving headliner) is breathtaking.

To start, Eilish encouraged fans to put their egos aside and dance during her set. She demanded the crowd get low, because “no one is too cool to jump around.” Fans were happy to get out of their comfort zone and get moving, even at the tail-end of a long and physically exhausting weekend.

The resulting jumps and excitement hailing from the Downtown stage shook the entire city. Eilish ripped through hits like “bad guy” and “bury a friend,” and found a quieter but more potent connection with the audience during “everything i wanted.” For a moment, Vegas stood still to fully take it in as Eilish gently sang the melodic single. The emotional ballad showcases a softer side of Eilish — one that is raw and unfiltered.

As one audience member was overheard saying, “Today was much more meaningful. The music was great, but today was a day where I actually felt the music.” 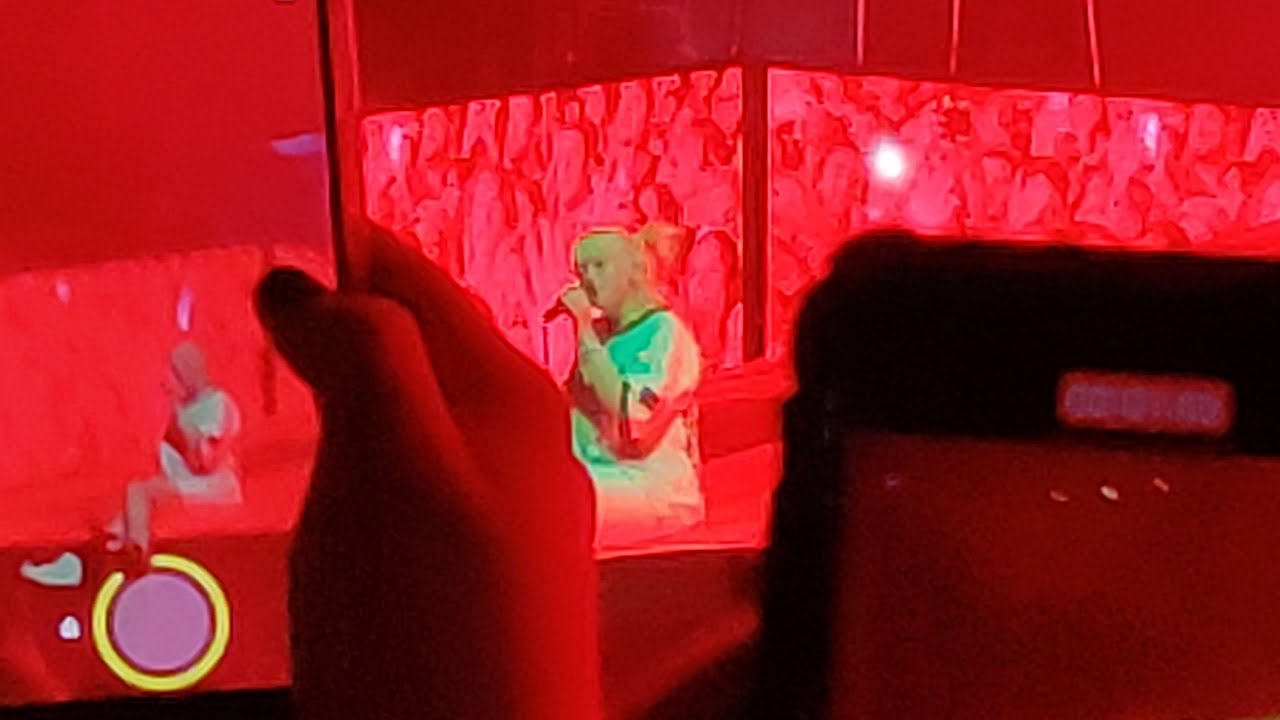