Artist of the Month is an accolade awarded to an up-and-coming artist or group who we believe is ready for the big time. In September 2021, we turn our attention to indie rockers illuminati hotties as they release their new album Let Me Do One More.

“I am a nerd about first lines of records,” illuminati hotties’ Sarah Tudzin says from her Los Angeles couch, visible alongside the violin-shaped blades of a fiddle-leaf fig tree. “I think that’s such a cool moment to decide. The tone of an entire album is in the first lyrical moment.”

One of her favorites, she adds, is from Fionn Regan’s The End of History (“If you happen to read this/ Rose was born,”). It’s an art she’s practiced. Since illuminati hotties’ beginnings, Tudzin has been using her opening remarks to launch bombs. 2018’s Kiss Yr Frenemies began with, “Your shortlist goes on and on,” a joke that instantly sketched an exasperating person.

She followed it in 2020 with Free I.H.: This Is Not the One You’ve Been Waiting For, and “Let’s smash to a podcast.” With her choice of slang, and her preference regarding the coital soundtrack, Tudzin evoked a whole relationship in a single line.

For her new album Let Me Do One More, out October 1st via Snack Shack Tracks in partnership with Hopeless Records, she sets the tone with “Pool Hopping,” one of her most joyful, summery songs yet. Even so, it starts with a moment of intellectual distance. “In every life there is a bell,” she sings, “One rounded curve of time or tell/ I’m on the left half looking over, over, over, ah-ha.”

The lyric references a bell curve. “We can think about a lot of art as being on one side or the other,” Tudzin explains. “The left side being art, or more esoteric, or, you know, out stuff, and the right side being more craft. Sort of following the rules to achieve the perfect — like a Katy Perry song would be on the right side of the bell curve, because they’ve cracked the code on what works as far as what people want to listen to in Top 40 radio.”

Here, the jaunty guitars seem to tempt Tudzin away from her own out there inclinations. “I wanted to put myself peering over the ledge of how to be a little more conformist,” she says. Tudzin is not just talking about music. “I don’t really know how to necessarily code myself to be in a room of regular nine-to-five people, or in a relationship context, or in a working human context, or a social context, or whatever.”

Ruminating about where you fall on the bell curve is a great way to ruin actual pool hopping, but it adds some lovely sharpness to “Pool Hopping,” the same way the acid from a lemon can cut through a too-sweet treat. The disconnect between body and mind, instinct and intellect, is at the heart of so many songs on Let Me Do One More.

As she explains, the track “Threatening Each Other re: Capitalism,” is about “being at a party” and “thinking.” On the surface level, the lyrics follow a person being a bummer during festivities. “I wanna do the party,” Tudzin sings, “To suck on air from people having fun.” The chorus encompasses a quick run to the corner store, which “Is selling spit/ Bottled up for/ Profit/ I can’t believe I’m buying in/ Isn’t that genius?”

The word “capitalism” is never actually uttered, but the same way that the title of Othello tells us where to look even though Iago has more lines, calling it “Threatening Each Other re: Capitalism” directs the audience’s attention away from the party.

“We’re sort of trapped in this machine,” Tudzin explains. “We’re forced to participate in the way that capitalism has been laid out in America, both in a social way and an economic way.” She adds, “It’s very real and currently very inescapable.”

When asked about her ideal system, Tudzin quips, “No rent and free pizza.” If not exactly that, then, “there should at least be a little more room for people in lower income brackets and people of color, people of different demographics, to have access to the same stuff that the top percentage of American wealth has.” 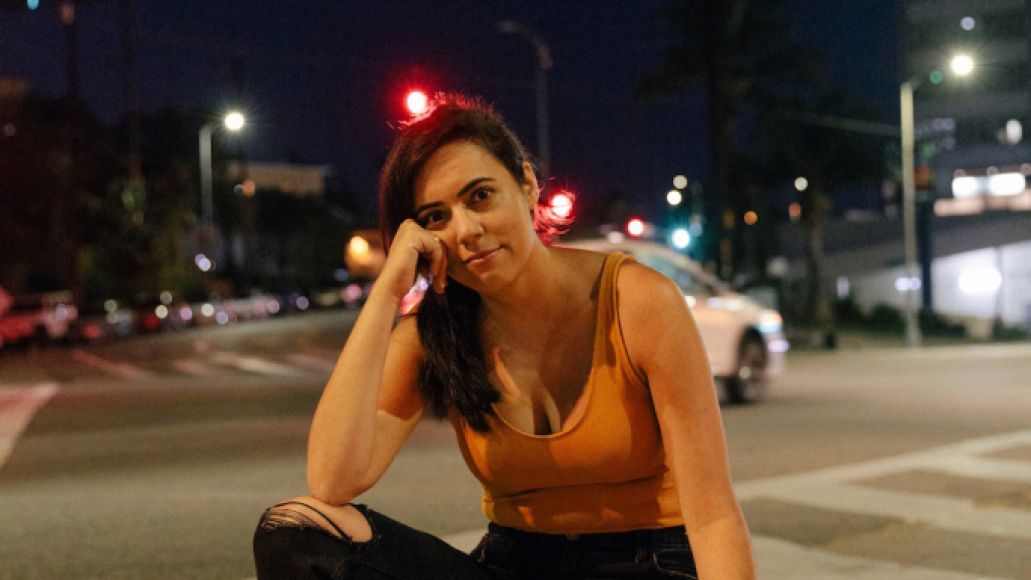 Tudzin knows a thing or two about getting screwed over for money. In 2019, illuminati hotties were caught in the mess created by indie label Tiny Engines, which engaged in questionable accounting practices. “It was just uncool,” she says. “It wasn’t living up to the ethos that they had laid out for the artists that they represented, and [Adult Mom] finally decided to call them out on it, and then everything fell apart. They still haven’t said anything publicly about what happened or how they had planned on remedying it with artists.”

Tiny Engines still owns Kiss Yr Frenemies, and the financial irregularities caused illuminati hotties to release Free I.H. independently. The experience looks to have been worth it: “It gave me the chance to have an imprint with the resource and support and guidance of Hopeless Records.” Tudzin settled on the name Snack Shack Records, which “was always the name that I had put on my studio and my publishing side of things.”

Snack Shack Records is currently “building a roster of artists,” although Tudzin is staying mum since she’s still “moving the pieces around a little bit.” But her Rolodex is obviously expanding. She roped in Big Thief’s Buck Meek for Let Me Do One More, enlisting what she called his “Sam Elliot cowboy voice,” for a humorous and heartfelt spoken word section on “u v v p.” And her expansive knowledge has made her a boon to rising artists. And earlier this year, she produced Pom Pom Squad’s debut album Death of a Cheerleader.

“We probably had been friends on the internet before, but I’d never really talked to them in person,” Tudzin says. “I was just a fan of the EP [Ow]. So they reached out to me. Mia [Berrin] pitched this wonderful idea of her grungy influence and her Courtney Love inspired rock, plus this wall of sound — Phil Spector, big room, Motown-style arranging. And she was like, ‘How do we combine those things?’ And I was like, ‘That’s an awesome idea. Let’s talk about it, let’s figure it out.’ We clicked.”