Metallica’s landmark 1991 self-titled fifth LP, better known as “The Black Album,” has returned to the Top 10 of the Billboard 200 chart for the first time in 29 years. The album’s increased sales were fueled by various reissues marking its 30th anniversary.

“The Black Album” has always been a mainstay on the Billboard 200, consistently selling a few thousand copies each week and landing in the lower reaches of the chart. In fact, it’s appeared on the tally for a remarkable 625 weeks, and ranks as the top-selling album ever in the SoundScan era with 17.3 million copies sold in the US alone.

This week, it jumped from No. 158 to No. 9 thanks to the variety of 30th anniversary formats, including a super-deluxe box set and remastered vinyl, among other versions. “The Black Album” racked up 37,000 equivalent album units for the week ending September 16th, with 29,000 coming in pure album sales. It marks the first time the mega-selling LP has cracked the Top 10 since August 1992.

Metallica recently played a surprise gig a the intimate San Francisco club The Independent, warming up for a slew of major festival and headlining shows coming up this fall. The metal titans will play Louisville’s Louder Than Life later this month; Sacramento’s Aftershock in October; and Daytona Beach’s Welcome to Rockville in November. They’ll also rock a two-night stand at San Francisco’s Chase Center in December to celebrate their 40th anniversary as a band. Tickets to Metallica’s upcoming shows are available here.

If you’re not one of the thousands of people who’ve already picked up the reissue of “The Black Album” yet, it’s available in multiple formats via the band’s merch store or Amazon.

The band has also curated a new covers compilation called The Metallica Blacklist, featuring over 50 versions of the 12 songs on “The Black Album” by various artists such as Miley Cyrus, Elton John, Corey Taylor, Ghost, and many more.

Check out former Metallica bassist Jason Newsted unboxing the super deluxe box set of “The Black Album” in the video below. 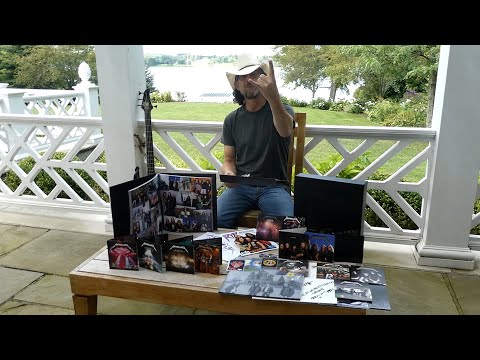