“Should he say the things he truly feels,” Morrissey sang to open his 2021 Riot Fest headlining performance on Thursday (September 16th), “And not the words of one who kneels?”

With this snippet of Frank Sinatra’s “My Way,” you could sense something bubbling just below the surface. The man who called the pandemic a “Con-vid,” and supported the far right, anti-Islam political party For Britain was a last-minute replacement for Nine Inch Nails, and from the very beginning he seemed to bristle with purpose. But the former frontman of The Smiths wouldn’t let it overtake the concert. And so he charged into one of the most bizarre shows in recent memory.

A parade of subtle political imagery flashed across a projector screen while Morrissey threw himself into the unrelated performance below. Except for a few brief, ominous outbursts, you might not have thought he was aware of the projections at all.

The kick drum displayed the words “Art Is Not a Crime,” and that message would appear on the screen several times throughout the 70-minute set. After the first full song, The Smiths’ 1984 classic “How Soon Is Now?” Moz said, “Happy Independence Day.” This elicited cheers from those concert-goers celebrating Mexican Independence, but he quickly killed that buzz. “We’re all slaves,” he blurted out, echoing his own previous comments about life under COVID restrictions.

He projected pictures of geniuses who had been discriminated against, James Baldwin and Oscar Wilde, and accompanied himself on the tambourine for “Every Day Is Like Sunday.” From beginning to end he stayed in perfect voice, delivering the lyrics with studio crispness and nailing every coo, growl, and wail. Throughout, he kept moving, sweeping from stage left to stage right, shuffling back and forth, or throwing up his hands to punctuate the notes. His performance would’ve winded many artists who have only lived half of his 62 years.

Still, much of the set held tension between projector and stage. His veganism went unmentioned but not ignored; at one point the screen showed a pair of Frankenstein’s monsters with the caption “Dairy Is Scary.” But Moz himself seemed unaware of the shadow play. He shook a pair of maracas on “The Loop,” and brought the house down with a thunderous rendition of “Shoplifters of the World Unite.”

The singer made another oblique statement on “I’m Throwing My Arms Around Paris,” using perhaps the most famous photograph of the 2018 French gas tax protests: a man in a neon yellow vest waving a French flag atop a burning barricade. There are few obvious connections between those protests and the loneliness of “I’m Throwing My Arms Around Paris,” except for the setting. Is Moz saying that the working class protesters are also in need of love? Is he supporting the thesis, advanced during France’s recent unrest, that elites care more about climate change than ‘real’ people? For better or worse, he didn’t elaborate.

Instead, he doubled down on his dramatic renditions, tucking his hand inside his blazer as if he were holding the pieces of a broken heart on “Never Had No One Ever.” Towards the end of “First of the Gang to Die,” he tickled a red flower over his face and threw it into the crowd. Perhaps as a curious tribute to Mexican Independence Day, he peppered this 2004 track about a Los Angeles gangbanger with Spanish ad-libs, repeating the words “gracias,” and “vaya con Dios” (“go with God”). You may think that’s offensive, but at least he didn’t play “All the Lady Dykes.”

“Can you hear me?” he asked the crowd. After they cheered, he mused to himself, “I wonder.”

During a cover of Pretenders’ “Back on the Chain Gang,” Moz pulled his blazer down and flexed. After the song he told the crowd, “You’ll have to make some big decisions soon. You’ll have to decide if you’re with us or against us.” This, too, he did not explain.

As Morrissey neared the finale, he turned into human electricity for The Smiths’ “Half a Person,” twisting and wrenching as some of the older audience members shouted along. Afterwards a woman near me who had surely been born more than a decades after The Smiths’ broke up said, “He’s so good. How can I be mad at him when he’s so good?” How indeed?

The set concluded with the 1993 solo banger “Jack the Ripper,” and if the projector screen was still on, it was impossible to see it. A whole London’s worth of fog poured out of the stage, as a violent lights bathed Morrissey in red interrupted by bolts of strobe lightning. As the song reached its feverish conclusion, he repeated the words “I love you,” over and over again until it turned into a high-pitched bark.

Morrissey left the stage without a word to the crowd, as the stage lights shone on and the final chords continued to ring long after the studio version had ended. Ah, the old false ending before an encore, I thought. The audience seemed to agree, and began chanting Morrissey’s name. The lights stayed on, and the crowd grew louder, cheering and whistling for the encore we all knew was coming. It was only 8:25, after all, a full five minutes before the set’s scheduled end. But he never re-appeared. The anti-climax sent restless shivers through the crowd.

It was a perfect conclusion, really. How Morrissey, to raise expectations sky high only to let us down one last time. 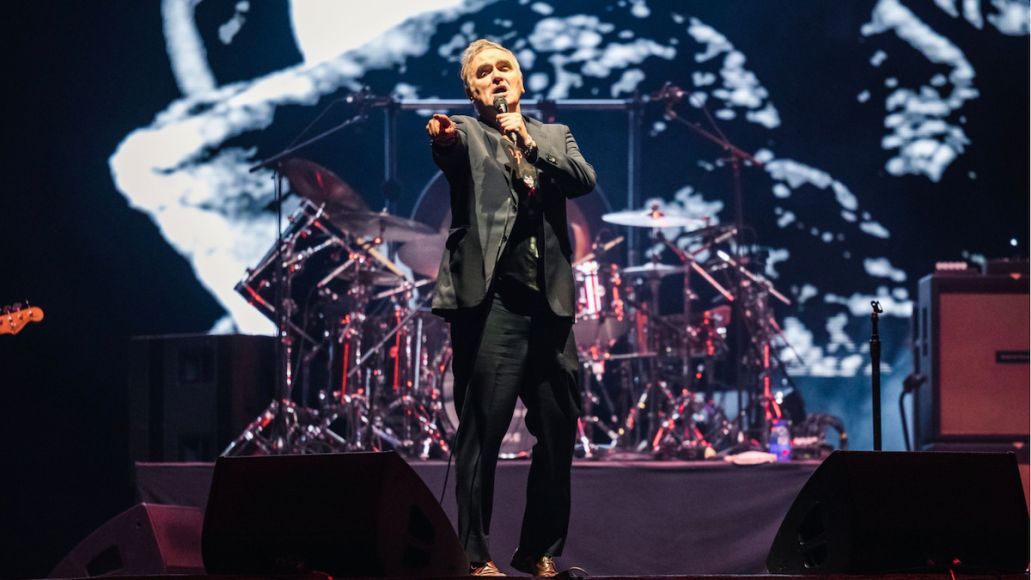 Setlist:
My Way (fragment) — Frank Sinatra
How Soon Is Now? — The Smiths
Irish Blood, English Heart
Alma Matters
Everyday Is Like Sunday
The Loop
Shoplifters of the World Unite — The Smiths
I’m Throwing My Arms Around Paris
Never Had No One Ever — The Smiths
First of the Gang to Die
Ouija Board, Ouija Board
Lady Willpower — Gary Puckett & the Union Gap
Knockabout World
You Have Killed Me
Back on the Chain Gang — Pretenders
Satan Rejected My Soul
Half a Person — The Smiths
Jack the Ripper

Riot Fest 2022 Stirs Up a Killer Weekend of Music with Nine Inch Nails, My Chemical Romance and More: Recap and Photos

The Agony and Ecstasy of Morrissey at Riot Fest 2021: Concert Review