The unofficial fan slogan has slowly become the official slogan, and in 2021 those three words were everywhere around Riot Fest at Douglass Park in Chicago over September 16th-19th.

A sign spelling out “Riot Fest Sucks” greeted ticketholders after they picked their way past the fairground with its Ferris wheel, its games of chance and skill, and a clown in a dunk tank insulting passerby. Once inside, via a pre-recorded video, Tom DeLonge tried to get people to chant “Riot Fest Sucks” several times a day. In the clip, DeLonge (who was not at Riot Fest this year) accused attendees of eating their own boogers.

The videos got old, but “Riot Fest Sucks and So Does Your Tattoo,” was a gift that kept on giving: a wall of pictures documenting hundreds of questionable decisions. The winner receieved a free tattoo cover-up, and from Thursday onward, the heavy favorite was “Fuck the Rainboner.” 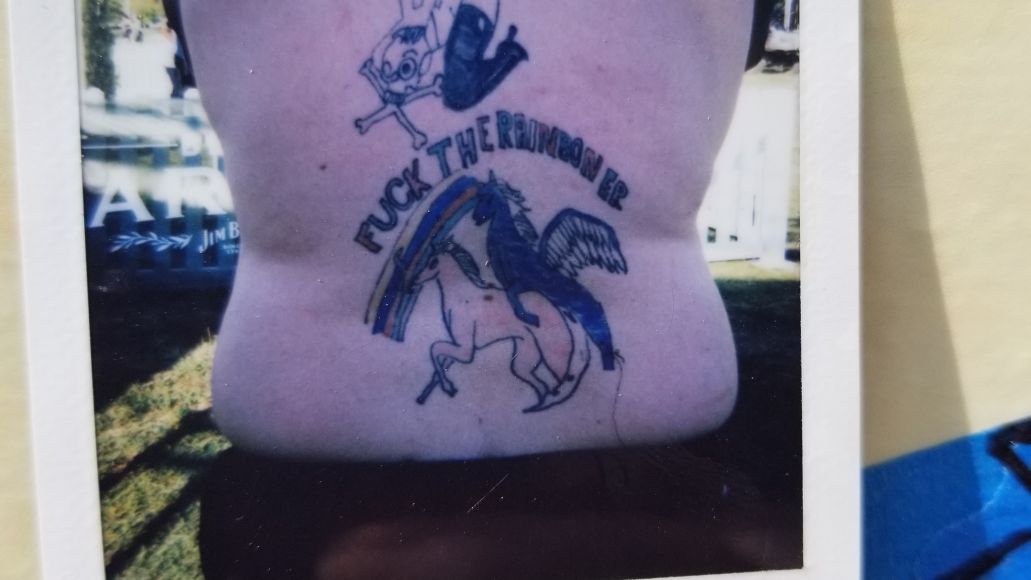 Still, some people truly meant it when they screamed, “Riot Fest sucks.” I heard it in Douglass Park two or three times — real pain, from a person who thought Riot Fest was for them, only to discover that this year’s iteration isn’t what they had in mind. You don’t get that aggrievement around the all-purpose extravaganzas like Coachella or Lollapalooza.

In a way, it’s a good problem to have. Riot Fest knows its lane, it knows its customer, and it knows a few genres inside and out: alternative, hardcore, metal, a smattering of hip-hop, and flavors of punk from pop-, to post-, to first edition. To a lot of people, that sounds like a dream. In the same way that some Game of Thrones fans bully George R. R. Martin to write faster and better, some Riot Fest fans love the concept so much, they are constantly disappointed in its execution.

Riot Fest 2021 was already a disappointment before it began, as fan-favorites like Nine Inch Nails, Pixies, and Faith No More pulled out of the festival due to COVID-19. The pandemic presented challenges, and in the coming weeks Chicago will find out if we’ll pay a price for the revelry.

But all of that aside, the bacchanal felt sorely needed. A lot of anger and frustration was vented at Riot Fest this year, as artists aired grievances about the world, while some fans flung themselves into the violent pits and others kicked back with buds and beer. The last 18 months have been ugly and hard. Riot Fest offered a bruising catharsis.

For most of the festival, the two main stages — the headline Riot Stage and the Roots Stage — stared across the lawn at each other, close together but miles apart. The booking could be maddeningly eclectic, made worse by several last-minute cancellations. But for a brief run on Saturday night, the festival curated a scorching run of political acts, who together explored themes of oppression and justice from vastly different angles. Spanning hip-hop and punk, empathy and rage, Saturday night at Riot Fest was one of the most provocative programs in recent festival history.

Gogol Bordello led the way, with a sunset show that had the audience squinting at the Roots Stage. No matter, the crowd found it easy enough to dance with their eyes closed. “Alcohol,” was intoxicating, and the whole audience chanted the chorus of “Start Wearing Purple.” But singer Eugene Hütz also explored ideas about borders, migration, and the stupidity of xenophobia. These were serious themes, playfully expressed, and as the sun finally dropped below the stage arch, the audience turned to darker thoughts.

On the Riot Stage, Vic Mensa brought his reportorial eye to his hometown of Chicago. During “U Mad,” he improvised a line about “[Chicago Mayor] Lori LIghtfoot’s bitch ass,” that caused the crowd to erupt. And the people who saw him perform “16 Shots” won’t soon forget it. This harrowing rendition came four miles from the spot where a Chicago police officer fired 16 rounds into Laquan McDonald’s back. I don’t believe in ghosts, but during that track I heard them screaming.

Chicago punks Rise Against continued the political themes, performing songs of alienation and modern distress from their 2021 album Nowhere Generation. They added a cover of Creedence Clearwater Revival’s Vietnam protest song “Fortunate Son,” and they did so with the help of Damian Abraham from the Canadian hardcore band Fucked Up, who were forced to cancel Riot Fest when their drummer had visa issues. Abraham’s growl blended poorly with the soaring tenor of Rise Against’s Tim McIlrath, but that didn’t matter: the middle finger to elites came through loud and clear.

Saturday closed with Run the Jewels. This was, as El-P said, their “third show in three years,” though he and Killer Mike didn’t show any rust. They came roaring out the gate with “yankee and the brave (ep. 4),” and scorched through a set heavy on RTJ4 cuts. Mike spoke movingly about Chicago’s own Alice Johnson, who encouraged him to think less about allyship and more about organizing. This segued into a furious rendition of “walking in the snow,” followed by “JU$T,” with its line, “Look at all these slave masters posing on your dollar.” To drive home the point, El-P warned the crowd to never trust any politician no matter their parties or pledges.

Altogether, the evening expressed a deep mistrust of authorities. In this way, it hearkened back to the original intentions of riotous music, even as the combination of punk and hip-hop pointed towards the festival’s future. 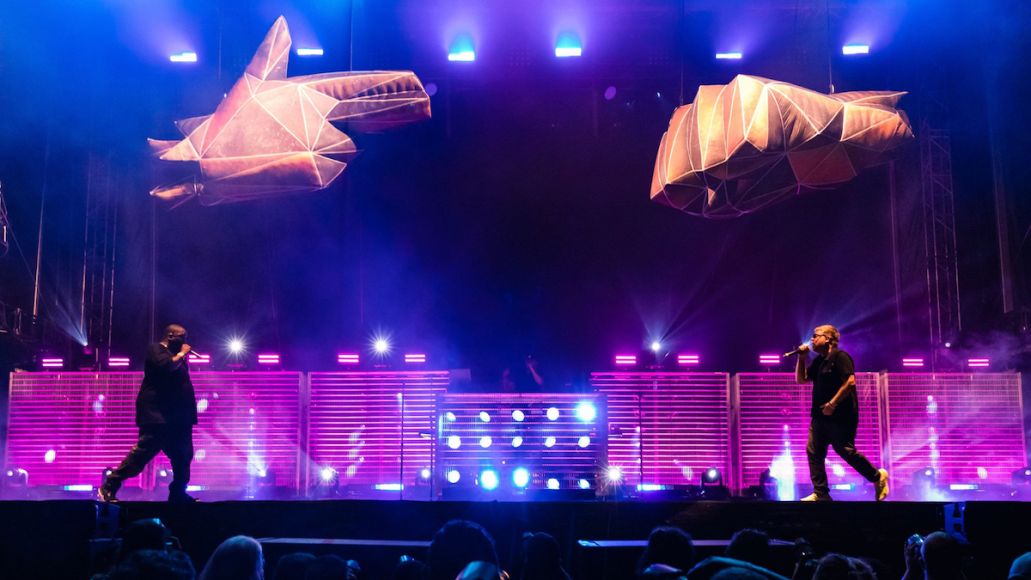 There were the usual colorful costumes: feathery fancies, a pair of hot dogs, penguin lovers in bowtie and pearls. A person in a monkey costume kept forcing themselves close to the stage — or close to the cameras, in any event, ensuring that their furry mug would be projected onto the big screens at mainstages throughout the fest.

Many young people favored the wide fishnet stockings that have been cropping up at festivals throughout the summer.  A nice enough look, though the tan lines remain after the stockings are gone, leaving the thigh looking like a trussed ham.

As for what colors are in vogue at Riot Fest, for the 16th year in a row it’s black. Band shirts, novelty shirts, cutoffs, crop tops, and nipple tape: black never goes out of style. There was almost more color to be found on people’s skin. Tattoos were everywhere you looked, and people without ink looked more naked than the naked people.

A Radical Idea: Play Somewhere Else

Whether it’s bad luck or poor planning, every festival has one stage that hosts a majority of the stinkers. Well, pinch your nose, ladies and gentlemen, for the Radical Stage.

To start, the plastic tiles took us out of the park and dropped us in a bad school gymnasium. Stage right was full of distracting foodcarts and people eating instead of listening, and though stage left offered a good view, no speakers faced that direction, and it had to compete with the sonic spillover from Roots and Riot. Besides that, the support structures and rigging destroyed the sightlines in what should have been a sweet spot in the center of the audience area. The division hurt artists, too. Several acts fell into the trap of playing down into the mosh pit, probably because it was the only chunk of the crowd they could see.

KennyHoopla was one such. He also struggled against the size of the stage, though there are signs that he’ll be a ferocious live performer soon. He came out spinning in circles during “silence is also an answer//,” and by the second track, “hollywood sucks//,” he was already gassed. “It’s deadass hot today and my dumbass wore two shirts,” he explained. By the time he got to “smoke break//,” he desperately needed one himself. Unfortunately, he had chosen to kill time with an opening DJ instead of saving those minutes to catch his breath mid-set.

He pushed through by screaming more than singing, and while his commitment never wavered, he’ll certainly need a lozenge. “Sorry I’m not giving you my best show,” he said. “It’s just crazy.” This is a bit harsh; his dive into the audience on “estella//” was fun, and his effort level was never in doubt. The heart was willing but the breath was weak. He’ll do better the next time he plays Riot Fest, and there will be a next time.

On Saturday at the Radical, Rancid did a rote run-through of tracks from their classic mid-’90s albums, Let’s Go and … And Out Come the Wolves. Singer Tim Armstrong is 55 now, and he doesn’t run around quite as much as he used to. The band could’ve used the help of the cameras on the bigger stages. Instead, they preached to the converted, while a small stream of people migrated towards Rise Against.

One of the most bizarre experiences at Radical was Sublime with Rome, which saw Rome Ramirez not only fighting the space but also trying to win over Bradley Nowell’s fans. The Sublime singles definitely landed, while the Sublime with Rome songs were politely tolerated. In some ways however, the Sublime experience hasn’t changed. For instance, two very nice bros became concerned that I wasn’t having a good enough time. For a while, they even forced me to dance.

I was saved by an equally agreeable quartet of young women who needed a picture taken. As it turned out, one of the women seemed to think that one of the men had a good eye for photography. I won’t predict wedding bells just yet, but I certainly smell bong water in their future.