Slayer have announced new reissues of their Metal Blade Records catalog, including vinyl re-pressings of seminal albums such as Show No Mercy and Hell Awaits. They’re due out October 22nd.

In addition to the aforementioned albums, the Haunting the Chapel EP and 1984’s Live Undead will also be reissued. Each release will be available in multiple vinyl colorways and on CD and cassette tape.

Metal Blade was Slayer’s label home during the band’s early years and played a vital role in proliferating thrash and speed metal in the 1980s. Slayer would go on to sign with Def American and work with producer Rick Rubin for 1986’s groundbreaking Reign in Blood, but for many hardcore fans, the early material remains just as vital.

Slayer’s obsession with Satanic and occult themes was prevalent on the early albums and would go on to influence the burgeoning European black metal scene. Musically, the band integrated more classic metal influences on 1983’s Show No Mercy before introducing lengthy progressive song structures on 1985’s Hell Awaits.

The 1984 stopgap EP Haunting the Chapel falls somewhere between the two LPs stylistically. Later that year, Slayer also released their first live recording in the form of the Live Undead mini-LP. Clocking in at just over 20 minutes, the set captured the raw and morbid energy of their early performances.

It’s been a while since Slayer’s been in the news. The band wrapped up their farewell tour in the nick of time back in December 2019, avoiding any pandemic overlap. Meanwhile, guitarist Kerry King has since hinted that he is working on new post-Slayer music projects.

Pre-order Slayer’s Metal Blade reissues at this location. See the full collection and tracklists below. 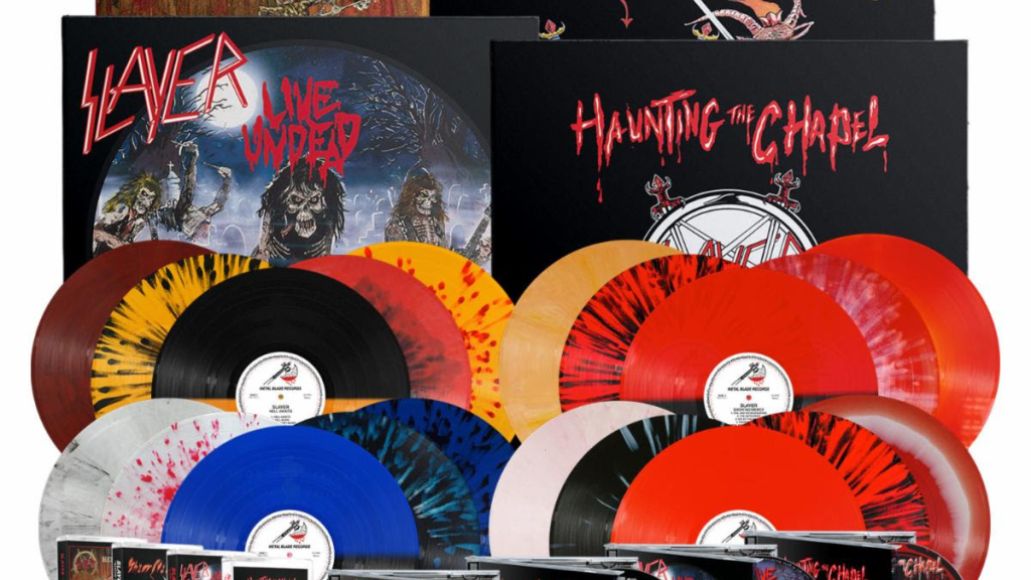