This review is part of our coverage of the 2021 Toronto International Film Festival.

The Pitch: Even within the wild, gaudy world of 1980s televangelism, Tammy Faye Bakker (Jessica Chastain) was an unforgettable outlier. With her beaming, pageant-girl smile, thickly-painted mascara, and squeaky Betty Boop singing voice, she was a vision of Reagan-era conservative excess alongside her husband, Jim Bakker (Andrew Garfield), with whom she built a million-dollar TV empire — one which quickly crumbled amid financial and sexual controversy surrounding Jim’s embezzlement of funds and cover-ups of sexual assault.

Pearlygate: Director Michael Showalter (The Big Sick) has long delighted in mining comedy from innate pathos, but he admittedly seems a bit adrift with this material despite the darkly comic gold that could be mined from such an over-the-top figure. Abe Sylvia’s script ushers us predictably through the major pain points of Bakker’s life: Her infatuation with, and growing suspicion, of Jim’s motives and affection; her yearning for the approval of her stern mother (played to the hilt by an endearingly brusque Cherry Jones); her own desire for the spotlight as a vehicle to worship God… and, in ways she can’t quite internalize, herself.

Michael Gioulakis’ cinematography warps from amber authenticity to grainy, even TV lighting as the Bakkers shift their gospel to make room for more rhinestone-laden kitsch. As the cracks in that facade start to show, he makes room for the hazy edges and Dutch angles that characterized his work with M. Night Shyamalan (Glass) and Jordan Peele (Us). It’s glitzy and in-your-face just like Tammy, but it also feels as gossamer-thin as the Bakker’s understanding of the teachings of Jesus. 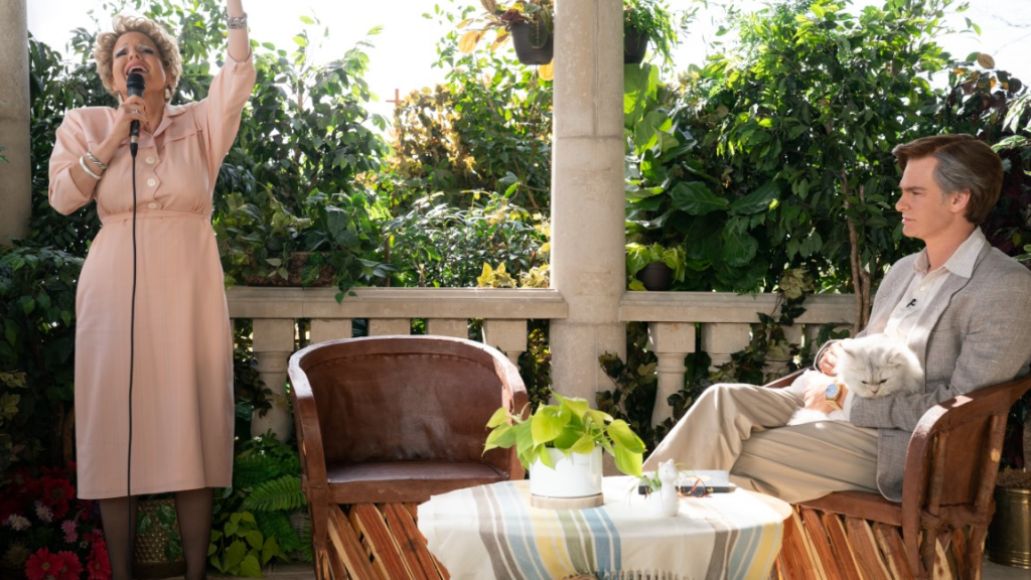 I’m Only Addicted to Diet Coke: But Tammy Faye understands the shortcomings of the movie around it; after all, it feels tailor-made as a vehicle for star-producer Chastain. To her credit, she gives a fascinatingly, nuanced performance with more layers than the lacquer-thick mascara and chipmunk cheek prosthetics she wears in every scene. For every big, broad decision Chastain makes — every veiled Midwestern-nice compliment, every guarded defense of her lifestyle, every squeak in her halting vocal performances of cheesy revival ballads — it’s hard not to remember that the real Tammy Faye was that big in real life.

After all, the movie posits, Tammy Faye was a performer to the hilt: In one early scene, she ingratiates herself to the rural revival church at which her mother plays piano (previously forbidden because of her nature as a child of divorce) by falling to the floor and speaking in tongues. From an early age, she learns that going big and attracting attention gets you what you want. Even if she doesn’t admit it, even to herself, that’s what she wants more than anything. She may pray to God above, but her eyes are also scanning for the spotlight.

The Wolf of Charlotte: But for all of Chastain’s bravura work, Eyes of Tammy Faye struggles under the weight of dramedic biopic formulas. Take Chastain’s co-star Garfield, who fares a bit worse with the material; while Chastain’s prosthetics contribute to that feeling of uncanniness that characterized Tammy Faye, his Jim Bakker just looks like his character from Hacksaw Ridge if he got stung by several bees. “God does not want you to be poor!” Jim says early in his and Tammy Faye’s courtship. (Showalter uses their story to poke at the emptiness of the prosperity gospel that’s tied so many American Christians’ faith to what they own (or rather, what they can give to con men fleecing them for their money).) 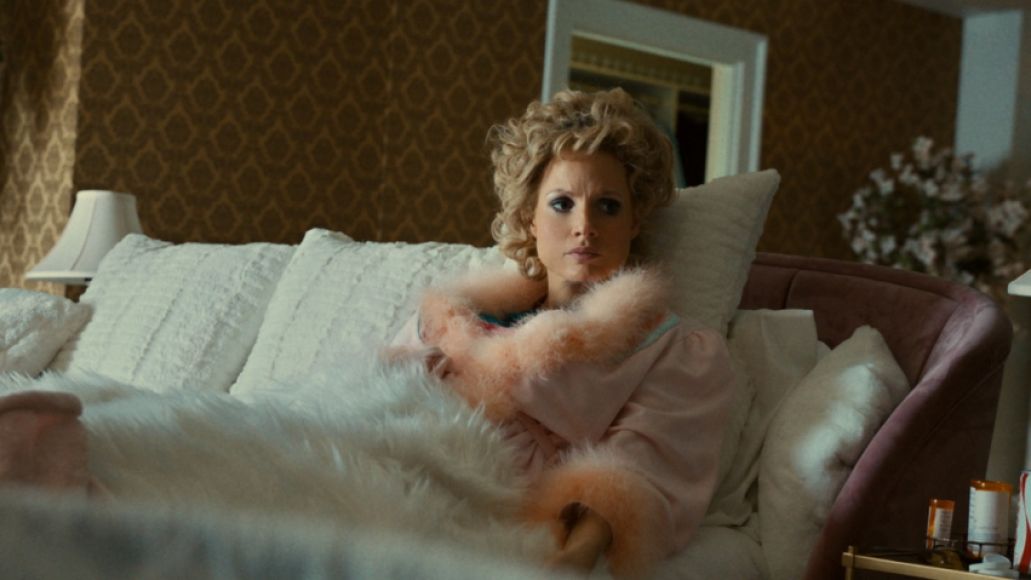 There’s a constipated gentility to his Jim Bakker that makes it easy to see why Tammy Faye got taken in, and watching him squirm under the various financial pressures he puts himself and The PTL Club in makes for plenty of dark humor. (“I’m only one man,” he whines to Tammy Faye about his looming creditors, as he steps out of a bubbly foot bath.) Like Tammy, he too craves the spotlight, waging a cold war with other TV preachers like Pat Robertson (Gabriel Olds, who nails Pat’s derisive chuckle) and Jerry Falwell (a booming, judgmental Vincent D’Onofrio).

But Showalter keeps the focus firmly in Tammy Faye’s perspective, which means that Jim’s side of the story innately suffers. He’s a manipulative dweeb, and Garfield can play that note pretty well, but he hits a brick wall in scenes not opposite Chastain. He’s having to fight the prosthetics to be heard, as opposed to Chastain, who leans into them to play up Tammy’s artificiality.

The Verdict: To be sure, Chastain’s turn as Tammy Faye Bakker is a transformative one, sure to lend her plenty of Oscar buzz. But peel off the layers of mascara, and Eyes of Tammy Faye offers a droll, albeit thin, critique of America’s infatuation with excess, and the spiritual mechanisms we use to justify it. It’s a story about the masks we wear, and the lies we tell ourselves to justify taking what we want. It’s genuinely funny at times, but at two hours, it drags on for far too long, and Chastain suffers from having to hold up too much of the film’s weight on her thickly padded shoulders. It’s a killer performance looking for a movie to support it, and it’s just not here.

Where’s It Playing? The Eyes of Tammy Faye slathers on its mascara, grabs a giant can of Diet Coke, and heads to theaters September 17th.

TIFF Review: The Eyes of Tammy Faye Can't Find the Soul Behind the Sequins