Though they’ve become known as one of the most influential indie rock acts of the 1990s, Dinosaur Jr. have shown little interest in slowing down anytime soon. Today, the Massachusetts trio have released Emptiness at The Sinclair, a new live album that only further illustrates Dinosaur Jr.’s infallible legacy. Additionally, the band have announced their rescheduled North American tour dates for 2022.

Recorded at Boston’s Sinclair, Emptiness at The Sinclair includes live renditions of Dinosaur Jr. tracks that span their entire career. It includes fan-favorite cuts from the band’s early days like “Just Like Heaven” and “Freak Scene,” as well as a handful of highlights from their new album, Sweep It into Space.

“It was odd going back to Harvard Square for the Sinclair show, lots of closed shops, less car and foot traffic, my first time back in a big-city since it all went down,” the band’s Lou Barlow wrote in a press release. “I had lived in Boston for about 10 years from the late 80’s-90’s and the bustling square was a common destination to look for records and meet with friends. The empty pandemic feel spooked me.”

Barlow went on: “Playing for a livestream is like pushing a rock up a hill trying to recreate the vibe of a real show. The isolation of the last year had made me nervous about performing again, especially in the context of Dinosaur Jr. where I typically rely on the energy of our crowd. Playing to an invisible audience and a real-time sparsely populated room of people doing their jobs (running lights, sound and staring at screens) was something different and, again, weird.

“Despite all my lockdown doubts once we started playing things clicked. My mind didn’t highjack me and it quickly began to feel like a real show. Having a few decent gigs on the Sinclair stage before, it began to feel familiar and, for lack of a better word, friendly. It will be much more of a relief to get back on tour but, this Sinclair show was a good band-aid, so to speak.“

After postponing the first leg of their North American tour due to concerns of the COVID-19 Delta variant, Dinosaur Jr. will resume their shows as planned next month. The make-up gigs will go down in September and October 2022, and you can grab tickets via Ticketmaster. See the rescheduled dates below. Also below, you can stream Emptiness at The Sinclair on Apple Music and Spotify.

Sweep It into Space, Dinosaur Jr.’s 12th studio album, arrived back in April. Fender also honored the band’s guitarist J Mascis this year with its signature J Mascis Telecaster, a replica of his 1958 top-Loader Tele.

Emptiness at The Sinclair Artwork: 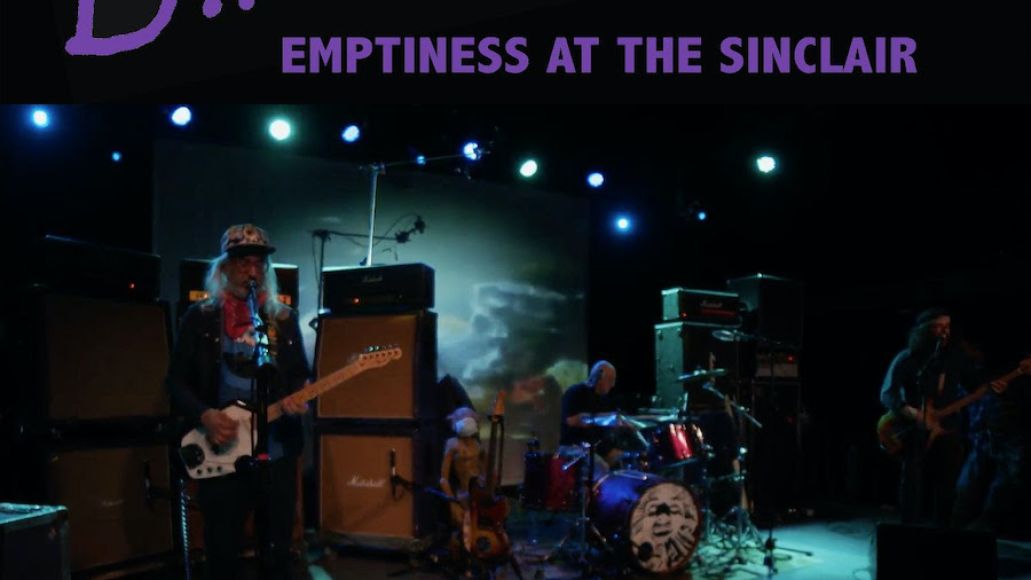