Eddie Van Halen was honored in his hometown of Pasadena, California, where a memorial plaque was unveiled to honor the late guitar legend.

The ceremony took place on Monday (October 11th) at the Pasadena Civic Auditorium. It was organized by Pasadena residents Randa Schmalfeld and Julie Kimura, who raised $6,500 via GoFundMe donations from Van Halen fans.

The venue serves as a fitting placement for the plaque, as Van Halen played 14 concerts at the Civic Auditorium between 1975 to 1978. These formative shows would launch Van Halen to stardom, after his family had emigrated from the Netherlands to Pasadena.

“This event brings together history and community to celebrate a world-renowned artist,” Williams said, according to Newsweek. “It’s not just the history of Eddie as a guitar legend, but also the challenges he faced growing up mixed race in Pasadena, which always spoke to me. And the community support and initiative to make this happen is inspiring. Thank you to everyone.”

Gordo also spoke on the importance of Van Halen to the city of Pasadena. The mayor recalled how he worked in a local restaurant and didn’t have enough money to attend Van Halen concerts. But he did get to serve the band margaritas.

“I was definitely a fan,” Gordo said, rerported the Pasadena Star News.

“The Van Halen family emigrated from the Netherlands to Pasadena in 1962. Alex and Eddie Van Halen attended schools in Pasadena and began playing music together with Eddie on guitar and Alex on drums. Years later, the brothers formed the band Van Halen, along with bassist Michael Anthony and vocalist David Lee Roth. Between 1975 and 1978, Van Halen performed 14 concerts at the Pasadena Civic Auditorium and Conference Center.

Regarded as one of the most successful bands of all time, Van Halen will forever be remembered for reinventing Rock ‘n’ Roll and their connection to Pasadena.”

The unveiling of the plaque came five days after the one-year anniversary of Eddie’s passing. The guitarist died of a stroke on October 6th, 2020, with lung cancer being the major underlying cause.

See a close-up of the memorial plaque below. 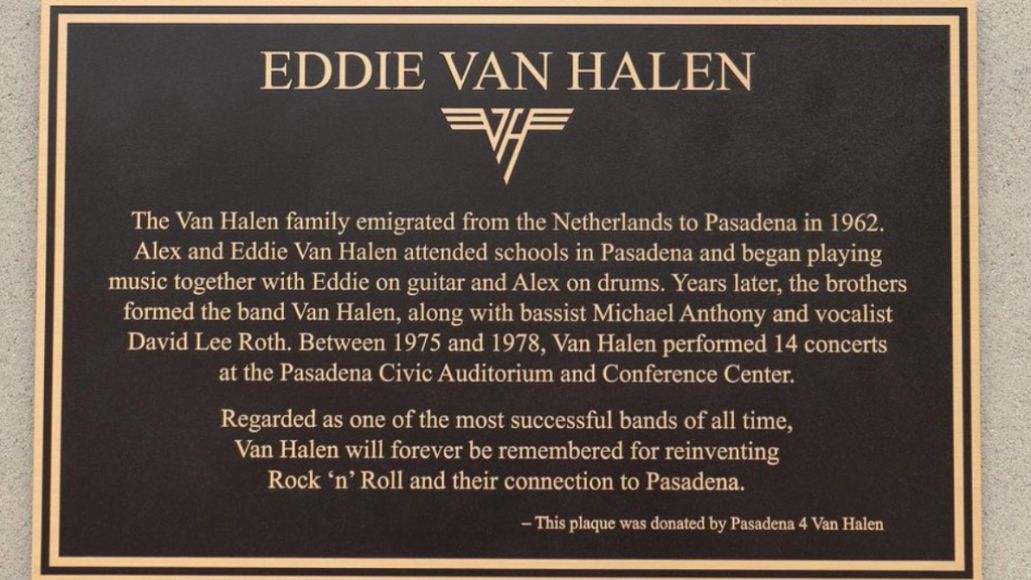