Innings Festival, the bizarre mashup of baseball and music that absolutely nobody asked for, has announced its 2022 lineup. Musical headliners include Foo Fighters, Tame Impala, St. Vincent, and My Morning Jacket, and the major leagues will be represented by Roger Clemens, Hall of Famer Tim Raines, Ryan Dempster, and more. The event takes place two days only, February 27th and 28th, while the confusion may last a lifetime.

The fourth iteration of the annual event goes down at Tempe Beach Park & Arts Park, which is just a batting practice bomb away from Tempe Diablo Stadium, where MLB’s Los Angeles Angels host their spring training. Batting cages will be available, and in years past the stages have been given names like Home Plate, Right Field, and Left Field. Plus, the event will feature a talk show on site, hosted by former right-handed pitcher Ryan Dempster and called Off the Mound.

The players may be past their primes, but the musical talent has been busy all 2021 headlining the world’s music festivals. In addition to Foo Fighters, Tame Impala, St. Vincent, and My Morning Jacket, the lineup includes Billy Strings, Black Pumas, Dashboard Confessional, White Reaper, Fitz & the Tantrums, and Low Cut Connie.

A few baseball players will take the stage at the “All-Star Baseball Jam,” and since they’re all retired, presumably only the amps will be juiced. The jam is led by former Padres and White Sox pitcher — and accomplished charity guitarist — Jake Peavy. Will they cover “Take Me Out to the Ballgame?” Will everyone cover “Take Me Out to the Ballgame?” What exactly ties all of this together?  There’s only one way to find out. Tickets go on sale Wednesday, October 6th, at 10:00 a.m. PT. You can take yourself out to the ballgame with Ticketmaster. Check out the full lineup below. 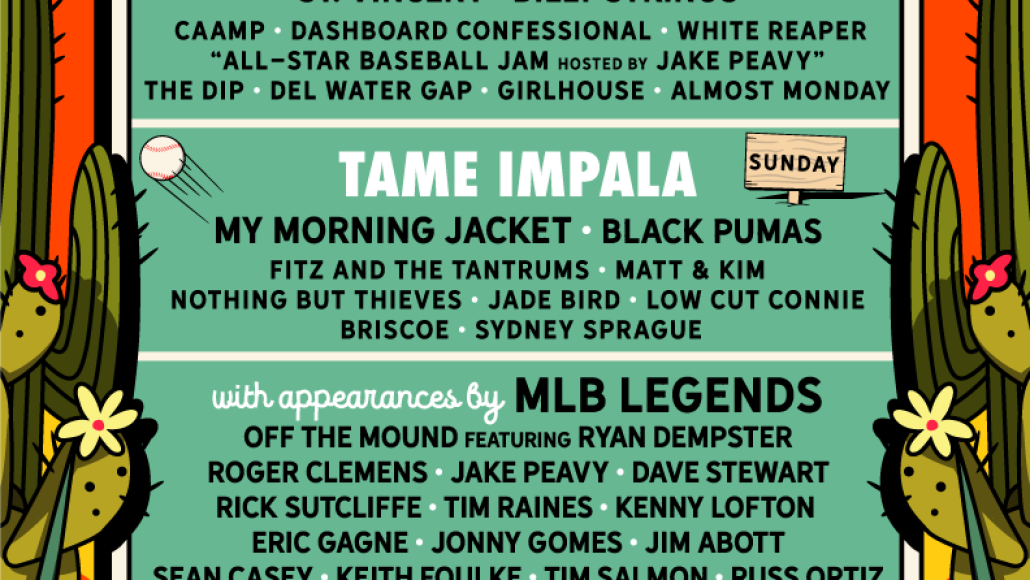