The Ohio State Marching Band paid tribute to Rush with a medley of the band’s songs during halftime of the football team’s game against Maryland on Saturday (October 9th). The performance was so impressive that it left the Rock & Roll Hall of Fame act “speechless.”

Considered one of the best, if not the best, college marching bands in the country, Ohio State honored Rush by performing “Red Barchetta,” “Fly by Night” and “Tom Sawyer.” According to Ohio State News, in order to match the late, great Neil Peart’s intricate drumming, the marching band expanded by 20 toms and 20 extra cymbals mounted on four racks.

If that weren’t enough, the marching band’s formations amazingly spelled out “RUSH,” “2112”, and “YYZ,” as well as replicated images representing the different members of the iconic Canadian rock band.

Video of the performance was shared on Rush’s official Twitter account, with the caption, “We’re speechless,” followed by three applause emojis. The football team itself also had an impressive day, crushing Maryland 66-17.

Another act currently honoring Rush is Primus, who are in the midst of a tour in which they are performing the former’s A Farewell to Kings album in full. The outing recently hit a hitch when a member of the touring party tested positive for COVID-19, resulting in the postponement of three shows. The tour is set to resume Wednesday night (October 13th) in Salt Lake City, with tickets available for all upcoming shows here. 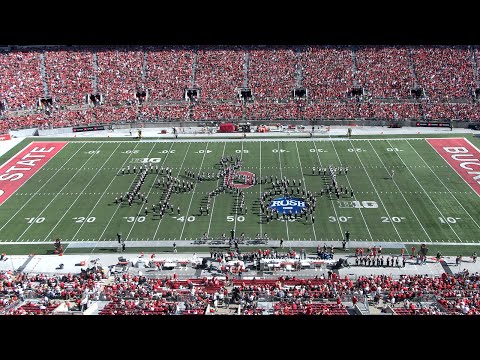