This review originally ran as part of our 2021 Nashville Film Festival coverage.

The Pitch: Taking place on Thanksgiving Night in an ostensibly creepy Chinatown apartment, The Humans follows the Blake family: lower-middle-class Pennsylvania residents Erik (an astounding Richard Jenkins) and his wife, Deirdre. Jayne Houdyshell won the Tony Award for her performance on stage as Deidre, and one of Karam’s many brilliant choices was to carry her along for the screen telling of the story. She’s invaluable to the ensemble.

The Blake clan is rounded out by daughters Bridig (the always wonderful Beanie Feldstein) and Aimee (Amy Schumer), Brigid’s boyfriend Rich (Steven Yeun), and grandmother affectionately referred to throughout as Momo (June Squib).

Human History: In 2016, Stephen Karam’s The Humans had taken Broadway by storm. The only title said more often than Hamilton the night of the 70th Tony Awards was The Humans — the production walked out with four trophies, including Best Play.

It’s not easy to write a play that becomes a Pulitzer Prize finalist; it’s even more difficult to then leap from one medium to another, as Stephen Karam did by boldly adapting The Humans for the screen in his directorial debut. Karam could not have stuck the landing more gracefully: The Humans is a wonder to behold, an exercise in tension grounded in a staggeringly honest depiction of an American family. It’s the most frightening non-horror film of the year, a family drama told with hallmarks of a genre film, but jump scares and low lighting are not the source of this film’s emotion. The dialogue is.

Casting Call: There’s not a weak link among the cast — Schumer gives a career-best performance as Aimee, a lawyer facing health issues, a breakup with a longtime girlfriend, and a looming job loss (“Banner year,” she quips). Amy carries Aimee’s older sister responsibility with a resigned weariness, constantly trying to make peace and make light of her health issues. Schumer exercises great comedic restraint, ultimately coming off as wildly believable in the role.

Any creative will empathize with Brigid, an aspiring composer working nights as a bartender and drowning in student loans. Beanie Feldstein has an inherent likability to her, but Brigid is often icy and hardened by the fact that her family doesn’t truly understand her or her work. She lashes out before she can be hit herself.

Family Feud: The brilliance of The Humans is in how realistic the family fights are. It’s not a slow build to an explosion. It’s a mumbling here and a knowing jab there. It’s being on the verge of tears and then hugging the person who caused the hurt and laughing hysterically the next. It’s begging someone to open up, and then making light of what’s shared once they do.

There’s also one of the best depictions of generational disconnect in recent film. Erik and Deirdre are still practicing Catholics, and Brigid and Aimee are more distant from their faith. Karam touches on these themes with astonishing care, refusing to belittle the parents for their faith, even acknowledging that this younger generation seems to collectively be searching for something. Aimee’s sexuality is a nonissue. All four of the family members are nuanced within the story, incredibly sympathetic at times and frustrating at others, and it’s clear that Erik and Deirdre’s nearly blind faith has hindered them and their relationship in some ways, as well. It’s a knife’s edge to balance on, but Karam’s script makes it work.

Perhaps the best example is a moment when the family sits down to dinner, reciting a prayer before they eat. Momo, the grandmother in the full throes of dementia, speaks coherently for the first (and only) time in the film: she joins in, reciting every word while holding hands with her family. The Blakes are so overjoyed that they say the prayer all over again. Despite Aimee and Brigid’s distance from their faith in adulthood, it’s clear that there’s still something sacred that ties them all together. 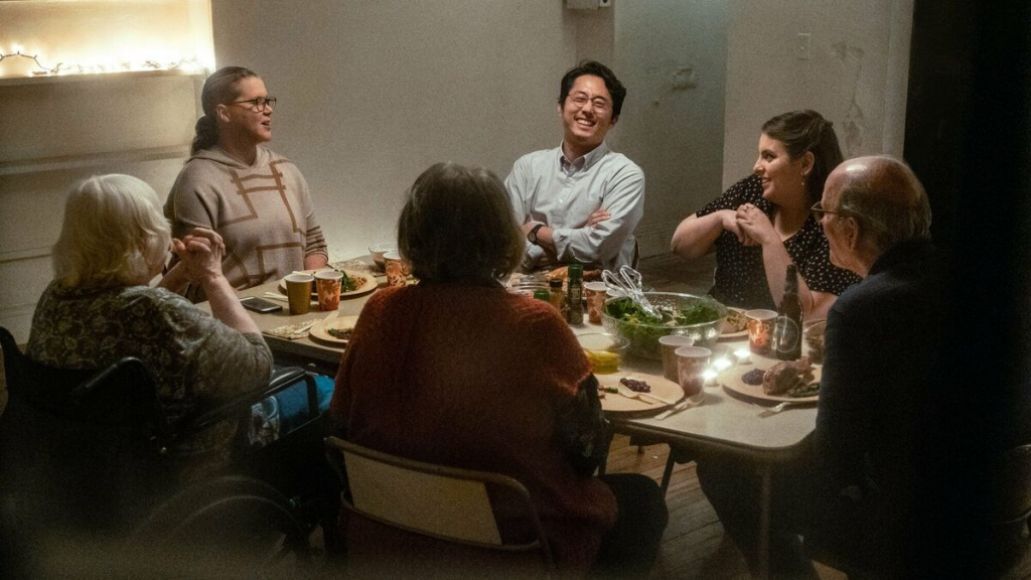 Things That Go Bump In the Night: From the opening sequence, shots of the New York sky from below street level, there’s a sense of unease. The apartment in which nearly the entire film takes place was clearly once beautiful but has fallen to age and New York City landlord tricks: messy caulk, bubbling walls, peeling white paint over things that should not have been painted in the first place. Brigid and Rich do their very best to make it nice, but the horror elements that come into play cut them down as the film stretches on. There are intermittent crashes and thumps from an upstairs neighbor. Bulbs keep burning out. Close-ups of individual characters shrouded in darkness are interrupted by noises that are later explained off as laundry, garbage disposal, and traffic.

Erik is also traumatized by a day in New York City the decade prior — he had brought Aimee into the city for a job interview on September 11th, 2001, a trip that nearly took both of their lives. He expresses unease constantly at the fact that Brigid and Rich now live in Manhattan rather than Queens. Within the already layered commentary on family and the cost of living, this thread is one of the most important, becoming clear in a climactic moment in the third act.

The choice to shoot a grounded story with elements of horror might not have worked in the hands of a less-skilled director. For this to be Karam’s directorial debut is shocking; The Humans is fine-tuned, from the dialogue to the blocking and the magnificent set-piece. There are long, indulgent takes that conjure the energy of the stage play, giving the audience the sense that we are in the room with the family, too — one sequence, Karam told the audience at the Nashville Film Festival afterwards during a Q&A on October 6th, is nearly nine uninterrupted minutes long.

Giving Thanks: Ultimately, the story is not about whatever frightening elements may be at play in this apartment; it’s about the family. Richard Jenkins ensures that Erik is really, truly human. Steven Yeun, ever a charm, plays off Beanie Feldstein beautifully and even has some great moments of physical comedy. (The movie is also, somehow, very funny!) What a joy that Jayne Houdyshell’s brilliant performance will now be available for so many to see.

The ties that bind us together as family may be tenuous, but they are vital. Often, they are the very thing that will keep us from drowning.

The Verdict: The Humans is magic. It avoids the pitfalls of many play adaptations, which often feel hindered by the constraint of one location. Presumably, due to the combination of the performances and the masterful direction and sound editing, The Humans remains not just watchable but gripping for its entire runtime. Expect Stephen Karam and the actors involved to slide directly from the festival circuit to the awards circuit.

Where’s It Playing?: The Humans played at the Nashville Film Festival on October 6th and will simultaneously be released in theaters and aired on Showtime on November 24th.

The Humans Review: This Star-Packed Film Is a Brilliant Exploration of Family and Fear