In the wake of the recent tragedy at Travis Scott’s Astroworld festival, Chuck D has issued an open letter to Live Nation, demanding they take accountability for the incident and accusing them of redirecting the blame onto Scott.

“I’m tired of these corporations shucking their most crucial responsibility,” Chuck D wrote. “I’m not buying the Young Black Man did it. He’s being blamed for a crime while the old white men running the corps that Travis and his fans trusted with their lives stay quiet in the shadows.”

The excuse of Scott’s irresponsible actions don’t wash,” the Public Enemy founding member continued. “If his act had a history of that behavior why promote him to bigger venues, why partner with him in the first place and let him headline a bigger audience? Live Nation controlled this show.” Chuck D went on describe how artists have hesitated to speak out against Live Nation’s negligence for fear of being blacklisted, and accusing them of profiting off, “Black pain, trauma, and death.” Read the letter in full below.

As a refresher: On the first night of Houston’s Astroworld, November 5th, a large crowd of attendees stormed the stage. Disturbing videos of the event show fans being lifted out of the crowd unconscious, while pleas for help were often overlooked. Ten people have died, and lawsuits are seeking hundreds of millions of dollars from Scott, Live Nation, and others. Scott, who has previously come under fire for inciting reckless behavior at his shows, issued an apology on social media, writing: “Houston PD has my total support as they continue to look into the tragic loss of life. I am committed to working together with the Houston community to heal and support the families in need.” 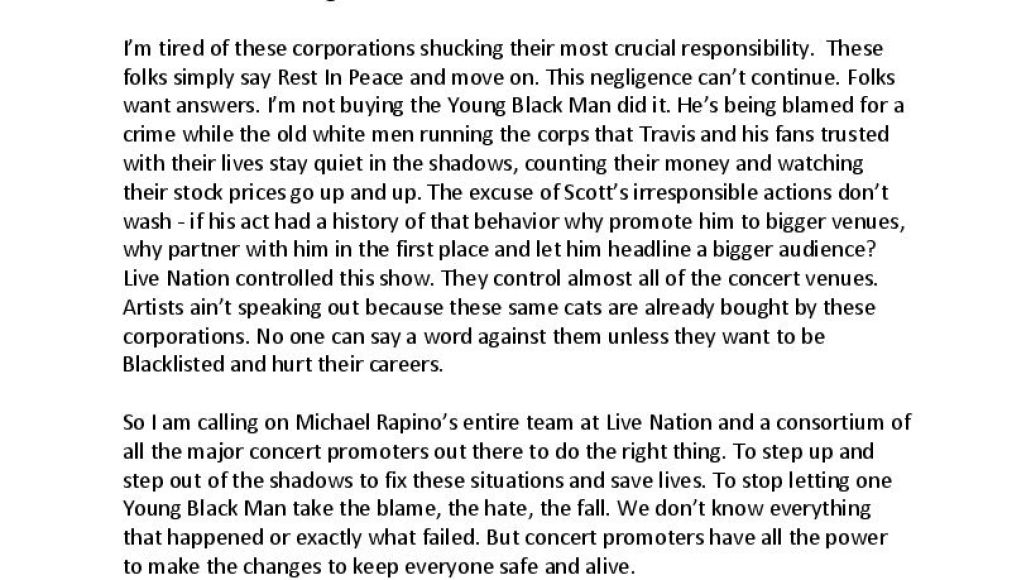