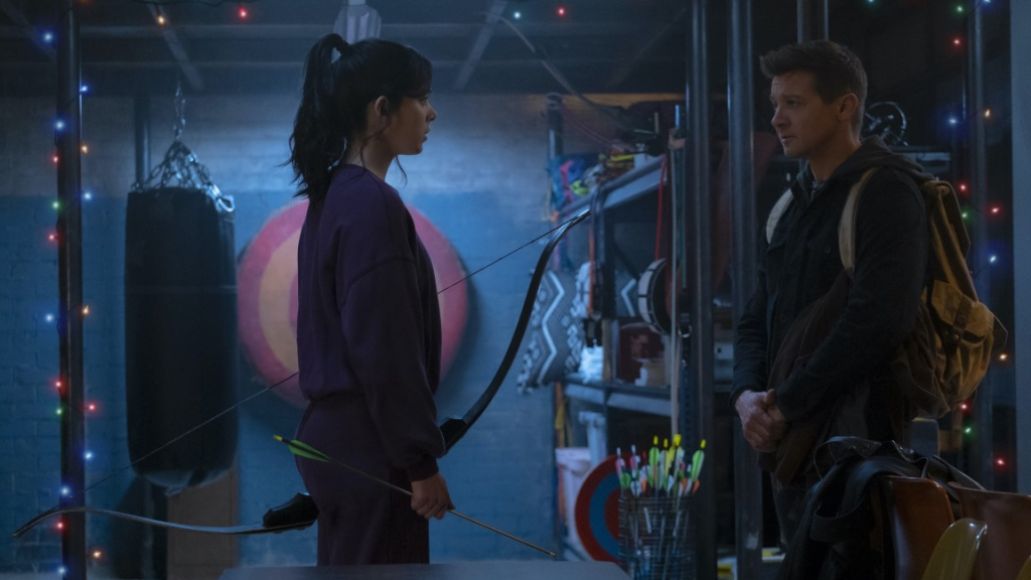 After a brief prologue (in which we learn Kate is the child of wealthy parents whose father died in the Battle of New York, and that a brief glance of Hawkeye’s bravery started her down her path to archery), we mostly follow Kate’s own life as a rebellious, headstrong young woman bristling against her sheltered upbringing. “Young people think they’re invincible, and rich people are invincible,” Kate’s mother Eleanor (Vera Farmiga, all flowy dresses and a startling black wig) tells her. “You happen to be both.”

It’s an interesting, if well-trod, entry point for her character, and Steinfeld is decently disarming in the role. It’d be easy for a self-appointed protege character to get impetuous and annoying, but Steinfeld leavens that with a strain of professionalism and no small number of homespun spy skills. (She infiltrates the secret auction where she comes across the Ronin suit in style). 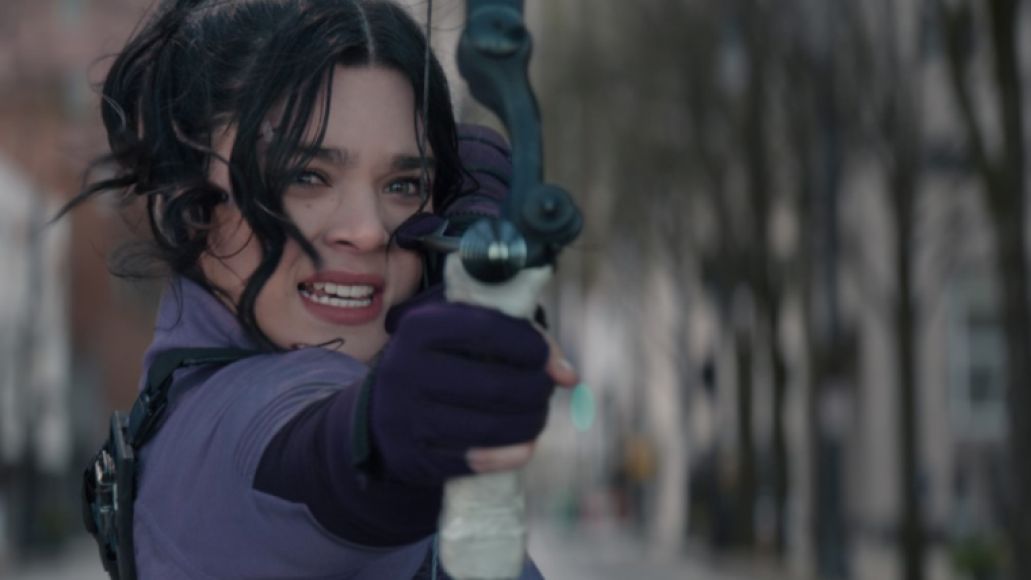 But What About Hawkguy? The fact that the story is so Kate-centric leaves Clint feeling like a supporting character in his own tale. (Loki had the same problem near the end, with its name character playing bystander while the new characters drove the plot.) While Jeremy Renner the man is annoying — see the Jeremy Renner app saga for more details — he’s always known how to make the most of Barton’s somewhat superfluous nature. Even in later appearances like Civil War and Endgame, there’s a world-weariness to him that befits his status as the Average Joe Avenger.

That works fairly well here, Renner shining in his few scenes of focus as a country mouse in the big city. Head writer (and Mad Men and Bridgerton producer) Jonathan Igla succeeds most when he lets us into the everyday mundanities of being a mid-tier Avenger. Sure, Hawkeye appears in the in-universe Broadway smash Rogers: The Musical — whose uproarious central ballad we get a teaser of in Episode 1. But he’s ushered into the background so hard they’ve essentially replaced him with Ant-Man (who wasn’t there!). People recognize him if they squint hard enough, but he’s treated with all the muted admiration of seeing your local weatherman.

Renner plays these moments with no small amount of fatigue: Barton clearly bristles at the attention paid to him, but a small part of him resents being forgotten amid a sea of hammer-throwing gods and armored billionaires. (Plus, there’s the whole “mourning the loss of Natasha” thing, which also plays a factor.) At one point, he’s forced to make a deal with a civilian to get an object back by reluctantly joining his LARP session in Central Park, which is easily one of the greater deadpan sequences in MCU history.

A New Team-Up: To its credit, its lighter tone helps alleviate the show from the more self-important air of some of the other Marvel series. While WandaVision spent much of its runtime prodding at the conventions of sitcoms past, Hawkeye takes the air of a much more contemporary single-camera comedy, with snippets of action to break up the laughs. Once they finally get together, Renner and Steinfeld have a lovely back-and-forth, Renner constantly walking away from Kate while she runs to him in a heady mix of aspiration and desperation. She’s got the skills, but she has no idea what she’s doing, and he’s going to have to delay his vacation to help her get out of her mess.

The problem is that absent this chemistry, there’s no meat on this particular Christmas goose. The plot, a tale of stolen Avengers items we’d just as soon forget (who really cares about Hawkeye’s Ronin phase?) and truncated Christmas plans, doesn’t have much to go on besides some boring Russian goons and Bishop family infighting. So far, Tony Dalton seems the most obvious candidate for Head Villain as Kate’s scheming future stepdad Jack Duquesne (aka the Swordsman in the comics), but his charm isn’t enough to override a thinly-written baddie. What’s more, the flat Marvel house style isn’t helped by the cold nighttime environs of a lot of the action sequences, which are so obscured by snow and the New York fog they may as well be incomprehensible.

The Verdict: It’s entirely possible they’ll turn things around for the remainder of Hawkeye‘s run; after all, absent the upstaging by the rest of the Avengers, Clint could have a real shot at anchoring the kind of man-on-the-run street-level Avenging we haven’t really seen since Iron Man 3. In fact, with the Christmas setting and the acerbic dialogue, the show leans into a real Shane Black vibe, which is a fitting tone to hit for a show about a guy with a bow and arrow just trying to get home for Christmas.

But they’d better get to work establishing some real stakes and letting Renner take center stage a bit more, rather than making such a transparent play of setting up Kate Bishop as his replacement. When it focuses on its leads, it has the potential to be a relatively diverting, if airless, chapter of the Marvel universe — one unfettered thus far by the weight of Phase Four’s multiverse mishegas. Just give us a bit more meat to the story, and let Hawkeye finally get his moment in the sun before he inevitably rides off into the sunset.

Where’s It Playing? Hawkeye hangs its arrows by the chimney with care on Disney+ starting November 24th. 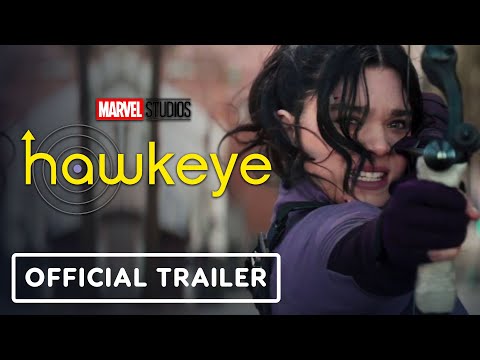