The Pitch: It’s a tale as old as time, though we see it in 1974 San Fernando Valley: Teenage boy Gary (Cooper Hoffman, son of Philip Seymour) meets disillusioned twentysomething girl Alana (Alana Haim — yes, of HAIM fame); boy and girl start dancing around each other’s orbit, clearly enraptured but afraid to say it; boy and girl start a waterbed business and take the Valley by storm.

The story goes from there, though in snakier and more complicated places than you’d expect. And all of it takes place amid the rock music, bell bottoms, and end-of-history attitude of Vietnam-era America, including gas shortages, the mayoral campaign of Joel Wachs (Benny Safdie), and an out-of-control Jon Peters (Bradley Cooper).

Soggy Bottom: I’ve no idea where Paul Thomas Anderson got this reputation as a self-serious fuddy-duddy who only makes Art Films. Sure, his most recent works — There Will Be Blood, The Master, Phantom Thread — are ornate, elegantly-crafted character dramas, though not without their own threads of wry humor.

But Licorice Pizza (a reference to the now-dead SoCal record chain) sees Anderson back in the sunny, whirlwind modes of Boogie Nights, Inherent Vice, and, more specifically, Punch-Drunk Love, an easygoing lark that ekes out spoonfuls of romantic charm, even — or perhaps because — its leads just can’t stop emotionally hurting each other.

There are threads of Anderson’s typical love for Altman here, with its naturalistic rhythms and the grainy, period-appropriate cinematography (supervised by Anderson himself, alongside Michael Bauman), alongside more than a bit of Love Story. In fact, Erich Segal’s original novel is perched on a bookshelf in one shot, winking at us with its promise of young love. That said, Licorice Pizza doesn’t follow the usual trajectories of these kinds of coming-of-age tales, and it’s so much better for it.

Love-Hate Relationship: None of it works without its two young leads, though, and Hoffman and Haim punch through the screen with a relatable electricity we haven’t seen in a good long while. Hoffman’s Gary Valentine, the child-star-turned-hustler who bounces from one scheme to the other with all the wide-eyed entrepreneurial America teaches him to cultivate. (His mother, played by Mary Elizabeth Ellis, is also his agent, manager, and a publicist for him and various other businesses in the Valley.)

It’s staggering how like his father he can be; one moment, where he raises his finger to shush someone while on the phone, makes him look the spitting image of his dad. But he also blazes his own trail, Hoffman’s stocky awkwardness blending nicely with Gary’s puffed-up sense of importance, a boy with the confidence of a man but the judgment of a child. 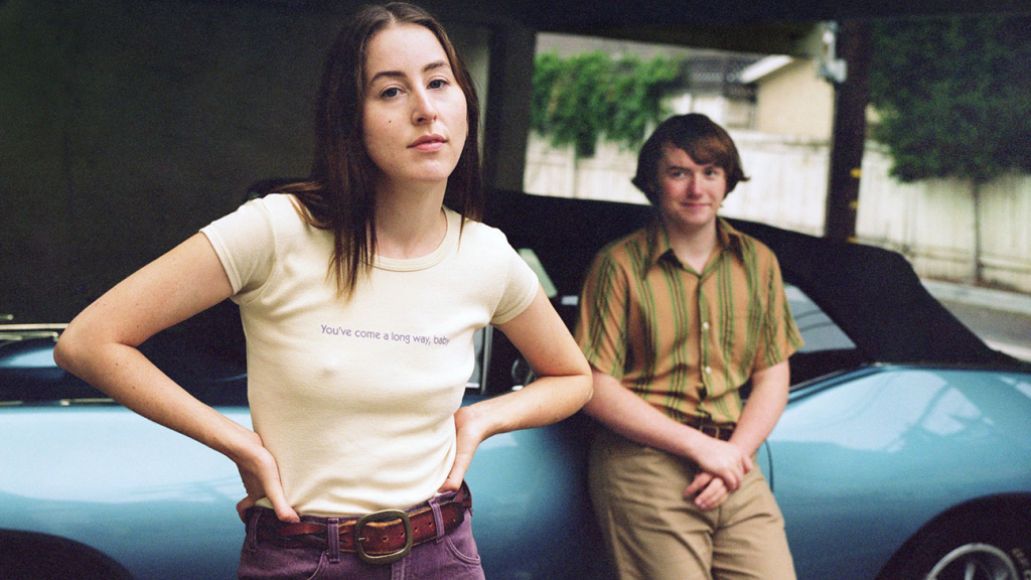 For as assured a debut as Hoffman gets here, though, Licorice Pizza is Haim’s show through and through. God, what a performance: that arched eyebrow, the cutting tenor of her verbal barbs, the nervous smile of a woman realizing she’s too old to be hanging out with kids, but too rudderless for any other options. From the film’s opening scene, where Gary hits on her while she’s working Yearbook Picture Day as a photographer’s assistant, she’s drawn to and repulsed by him in equal measure. “I think it’s weird that I hang out with Gary and his 15-year-old friends,” she muses at one point. It’s a decision that informs their entire back-and-forth, as they whirl in and out of each other’s orbit, trying on different identities (actor, waterbed salesman, political volunteer) and seeing how they each fit.

But where Gary blisters from one side-hustle to the other with all the confidence of a teenage boy, it’s Haim’s exasperation that draws the eye. As a young woman growing up in the ’70s, she understands her danger and her power — the child of strict Jewish parents who yearns to escape and explore her sexuality, but who always finds herself drawn to men who treat her as a side character in their own story.

That tension is everywhere in Haim’s slumped shoulders and frustrated outburst; like so many of us, she looks mad at the world but is just mad at herself. It’s the kind of star power we saw in a young Barbra Streisand (which fits, considering one of the film’s most entertaining and exciting chapters involves their run-in with Streisand’s volatile boyfriend Jon Peters), and I can’t wait to see more of her.

You’re Always Thinking Things, You Thinker! PTA’s script dances around this unlikely pair in hypnotizing fashion, its episodic structure easing us from one chapter of their young lives to the next before you even know the last one’s done. It feels so effortless, supported nicely by Anderson’s bone-dry sense of humor (shades of Buck Henry’s The Graduate script abound). Like magnetic poles, Gary and Alana push and pull away from each other with equal force, Anderson frequently filming them running towards or away from each other.

And what charming people and places they run to, Anderson filling his lens-flared version of LA with a veritable parade of ’70s Guys and Gals. There’s Peters, of course, Cooper bouncing from mood to mood with all the intensity of a coked-up Tom Cruise from Magnolia. There’s Sean Penn as a William Holden-like actor Alana gloms onto almost purely to make Gary jealous (and because he compares her to Grace Kelly). And stalwart character actress Harriet Sansom Harris steals the show right out from under her young co-stars as a casting agent whose ferocity borders on the lupine. The list goes on.