Slipknot’s headlining set at their “Knotfest Roadshow” tour stop in Phoenix, Arizona last night was interrupted when a raging fire broke out in the lawn section of the Ak-Chin Pavilion. The band took an unscheduled intermission to allow the fire department to put out the blaze.

Apparently, the crowd started a massive bonfire, causing the masked metal band to pause its set for a half hour. Slipknot are known for their explosive live shows, but this took it to a new level. In fact, it was reminiscent of the chaos that went down at the infamous Woodstock ’99 festival, as recently chronicled in an HBO documentary.

According to Exclaim!, the fire intensified after the audience had just sung “Happy Birthday” to guitarist Mick Thomson. Fans had thrown lawn chairs and assorted trash into a large pile, starting the bonfire and forming a circle pit around the flames.

No injuries were reported, but Slipknot’s setlist was shorter than usual, as staples “Duality” and “Spit It Out” were cut from the show.

Update: The Arizona Republic reports that the fire is currently under investigation. A spokesperson of for the Phoenix Fire Department said that Engine Company 40 “responded to the pavilion and found a large contents fire … possibly started by bystanders at the event. … The fire was thoroughly extinguished without any extension to the major structure and no injuries were reported at the incident. The exact cause of the fire is currently under investigation and no persons were displaced at this incident.”

The Phoenix gig marked the final date of Slipknot’s “Knotfest Roadshow” tour, which also featured Killswitch Engage, Fever 333 and Code Orange. All those bands, plus Bring Me the Horizon and Vended (sons of Slipknot’s Taylor and Shawn “Clown” Crahan) will be on the lineup for the one-day Knotfest Los Angeles festival, taking place this Friday (November 5th). As previously announced, the fest will be available for those not in attendance as a livestream event. Tickets for both the in-person festival and virtual stream are available via Ticketmaster.

In other news, Slipknot have been teasing new music snippets along with a series of NFT releases on a newly created site called “The Chapeltown Rag.” Frontman Corey Taylor had recently mentioned that a new album is nearly done, and the first single may surface before the end of the year.

Watch fan-filmed footage of the raging bonfire at Slipknot’s Phoenix show below, followed by our recent interview with Taylor, in which he expressed his excitement for hitting the road with Slipknot again following the long pandemic break.

THEY SET THE LAWN ON FIRE AT SLIPKNOT TONIGHT 😭😭 pic.twitter.com/5ZoULxw6NL

The lawn pit at Slipknot tonight is fire — literally. pic.twitter.com/IrzgddSOEU 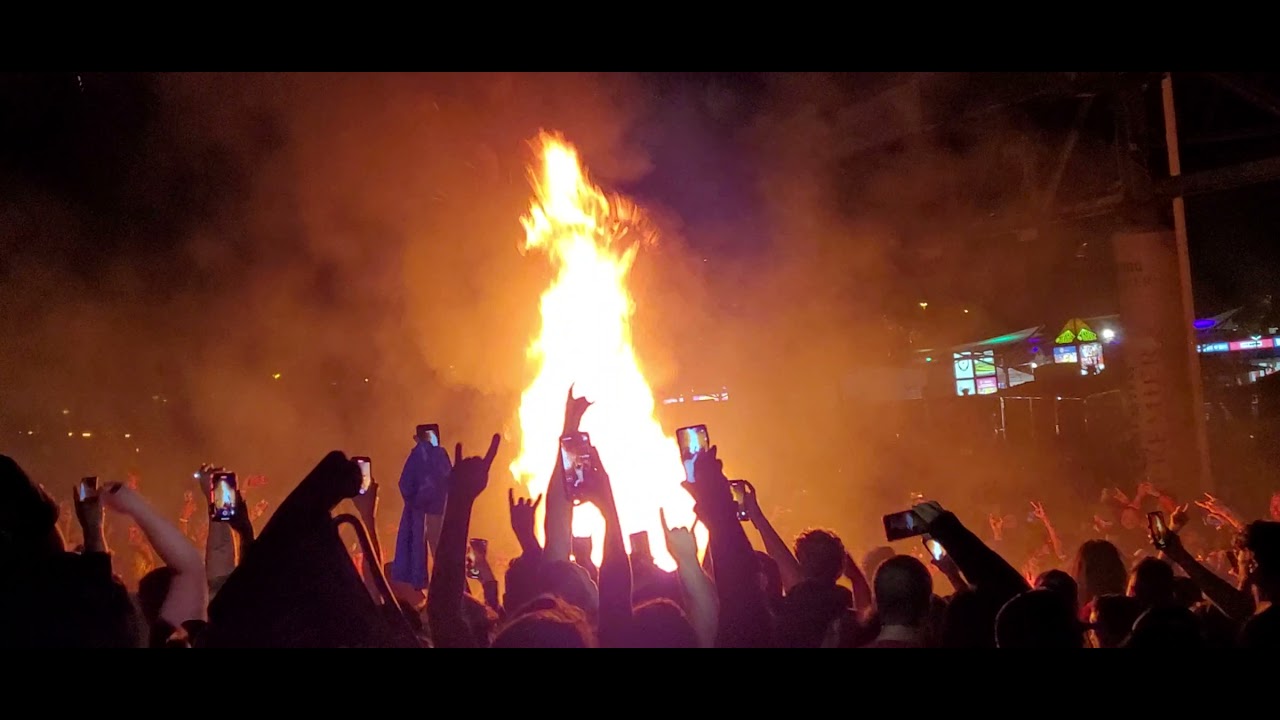