The Pitch: Can’t wait for that other big-budget film adaptation of a classic fantasy series to arrive on Amazon? Well, 10 months before The Lord of the Rings‘ scheduled debut, here comes The Wheel of Time. Drawn from the novel series created by Robert Jordan, the series aims to deliver both human stakes and wild fantasy action, with a largely unknown young cast and a lot of world-building to get through.

The Hero With Five Faces: If you’ve spent any time studying the concept of the monomyth, as identified by scholar Joseph Campbell, then The Wheel of Time begins in a place you’ll find eerily comfortable. The series kicks off when the magically gifted Moiraine (Rosamund Pike) arrives in the small town of Emond’s Field, in search of a prophesied figure who may one day become the reincarnation of the Dragon, a person capable of wielding immense power that might either save the world or destroy it. Once in Emond’s Field, she identifies five of the local youths who might be said Dragon Reborn, and brings them from their homes on the path to a new adventure.

So, that’s five different potential Luke Skywalkers who Obi-Wan Kenobi plans to teach about the Force before the returning darkness curses them all, and one of the show’s strongest qualities is the level of development each gets as the series moves forwad. While the characters get split up sooner than you might expect on their journey, there’s at least something unique to each of them to make them intriguing characters, with Egwene (Madeleine Madden) standing out initially as the most engaging.

The rest of the ensemble (including Josha Stradowski, Marcus Rutherford, Zoë Robins, and Barney Harris) also have plenty of potential, but to be clear, the very best thing that Wheel of Time has going for it is Rosamund Pike. That’s meant not to put down the rest of the series, but to celebrate her role in it. For one thing, the sheer fact of her star power makes this a show to take seriously, but in addition it’s hard to imagine an actor better able to master all of the complicated aspects of the role: the gravitas along with the physical demands seem to come to her as natural as breathing.

A Hole-y New World: What the show struggles with most, though, is easing newcomers into all of this world-building; even when simplified to some degree for explanation in voice-over, there’s still a lot to comprehend about the politics of this very alien universe. It’s to the point where at certain moments it feels like the nuance is largely lacking, especially when broad gender-based generalizations are being made. 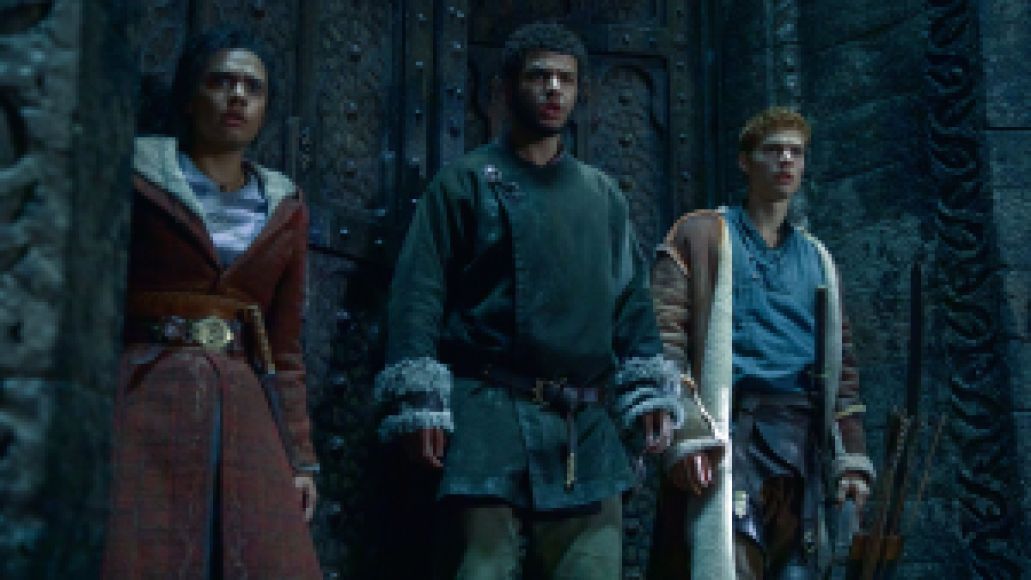 The Wheel of Time (Amazon)

However, in an early episode, Rand (Stradowski) talks about this quest he’s somehow found himself on with real skepticism as to what he’s even doing there, so far away from home — a highly relatable moment of doubt. The fact that showrunner Rafe Judkins makes space to showcase moments like this speaks to the show’s determination to connect these characters with the audience. After all, who among us, especially as an adolescent, would not be at least a little bit confused and ambivalent about being enlisted for great mystical purposes by some lady with a nice cloak and magic powers.

Every detail seen on screen feels fully considered and deliberate, and they don’t skimp on the pyrotechnics, literally and figuratively: One sequence from Episode 4 in particular stands out for the way it blends a traditional swords-and-shields battle, one that Ridley Scott wouldn’t be ashamed to put his name on, with magically-powered attacks. It’s not quite on the sort of epic scale Middle Earth fans might be accustomed to, but it’s still pretty impressive, especially on a TV budget.

The Verdict: When distilled down to its simplest elements, it’s easy to get a handle on the kind of story that Wheel of Time is trying to tell, but despite that this might be a show that will be accepted more readily by book fans than newcomers to the material. However, for those who hang in there, rewards abound. The very first words of the series, as spoken by Moiraine, are “The world is broken” — a relatable sentiment, in times like these, and as wild and weird as this show might get, that sense of relatability is always present.

Where to Watch: The first three episodes of The Wheel of Time premiere Friday, November 19th on Amazon. The following five episodes of Season 1 will be released weekly after that, and a second season is in production now.