Britney Spears has filed a cease-and-desist letter against her sister, Jamie Lynn Spears, over the latter’s forthcoming memoir Things I Should Have Said. In the letter, Britney and her lawyer Mathew S. Rosengart demand that Jamie Lynn refrain “from referencing Britney derogatorily during [her] promotional campaign” for the book.

“Although Britney has not read and does not intend to read your book, she and millions of her fans were shocked to see how you have exploited her for monetary gain,”  Rosengart writes in the letter, which adds that Britney was the “family’s breadwinner” who “otherwise supported” Jamie Lynn.

The letter continues: “You of all people know the abuse and wrongdoing Britney had to endure during the conservatorship, after initially growing up with a ‘ruinous,’ alcoholic father. In fact, your own book reportedly states that your father ‘spent most of my life in that cycle of ruinous behavior. His bouts of drinking caused me periods of torment and sorrow.’ As I have previously stated, having endured a 13-year conservatorship that stripped her of civil rights and fundamental liberties, Britney will no longer be bullied by her father or anyone else.”

“You recently reportedly stated that the book was ‘not about her.’ She takes you at your word and we, therefore, demand that you cease and desist from referencing Britney derogatorily during your promotional campaign,” the letter warns. “If you fail to do so or defame her, Britney will be forced to consider and take all appropriate legal action.”

Britney previously criticized Jamie Lynn on Twitter for a recent Good Morning America appearance promoting the memoir. After Jamie described Britney’s behavior as having been “out of control,” Britney shared a lengthy text post airing grievances about her family’s behavior.

“She was never around me much 15 years ago at that time,” Britney wrote. “So why are they even talking about that unless she wants to sell a book at my expense?” Britney added that Jamie Lynn was “the baby” of the family, who “never had to ask for anything.” Read the full cease-and-desist letter and Britney’s Twitter post below.

Britney’s lengthy conservatorship under her father was finally terminated back in November, and she hasn’t hesitated to call out her other family members’ involvement in it. She’s publicly accused her mother of proposing the idea of the conservatorship, and she’s lashed out against Jamie Lynn’s previous silence in the matter, saying that “[her] so-called support system hurt [her] deeply.”

Meanwhile, on Wednesday Rosengart will be back in court to fight Jamie Spears’ request to have his daughter continue paying his legal fees, despite the conservatorship’s termination. In docs filed ahead of the hearing, Rosengart alleged that Jamie paid himself “at least $6 million” from his daughter’s estate during time as her conservator, plus “petitioned for fees to be paid to dozens of different law firms” for “more than $30 million.” Additionally, Rosengart accused Jamie of exploiting her fame to pitch his own show to the Cooking Channel and enlisting the help of a music supervisor who worked for his daughter to make a promo reel (via Variety). 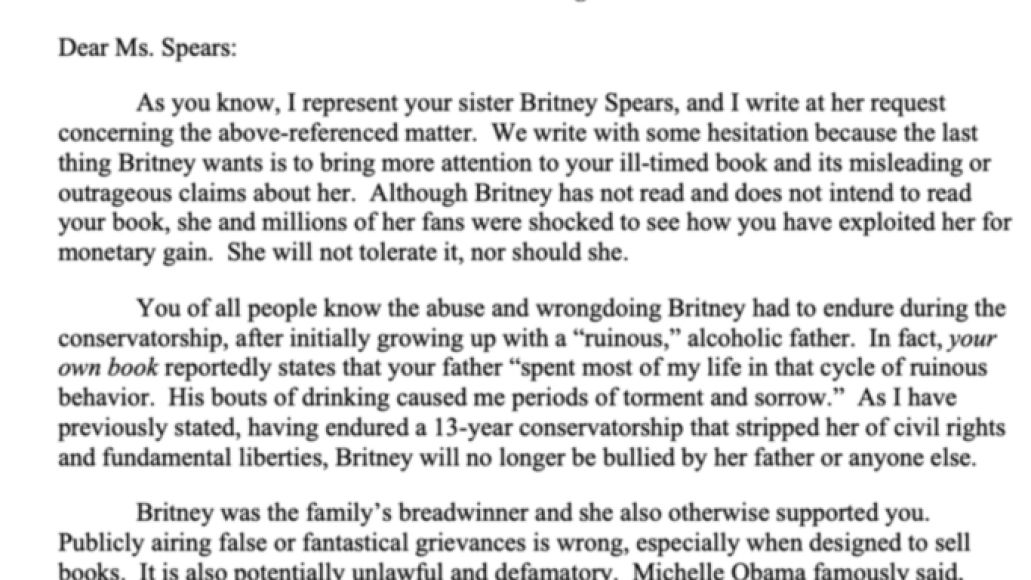