The Pitch: Somewhere in the vast wide multiverse, there is a planet Earth where, in the year 2022, the How I Met Your Mother spin-off series How I Met Your Dad is just now reaching its eighth season, with star Greta Gerwig thinking longingly about the indie film about growing up in Sacramento that she always wished she’d have a chance to direct.

That planet Earth is not our planet Earth, where, in the year 2022, How I Met Your Dad ended as a 2014 CBS pilot that never made it to series, Greta Gerwig’s 2018 film Lady Bird received five Oscar nominations, and Hilary Duff is now starring in How I Met Your Father, a spiritual and literal sequel to the long-running CBS sitcom about the world’s most long-winded parent giving his kids way too much information about his past dating life.

Does Sophie (Duff), a single 29-year-old photographer living in New York City, eventually find love? Well, she’ll at least have a kid, who in the year 2050 is being told all about the story leading up to his conception — and as the older version of Sophie (Kim Cattrall) warns him, it’s going to be  a long one.

A Change in Point-Of-View: From the opening moments, Father establishes an important switch-up to the HIMYM format — while the original series put the camera on Lyndsy Fonseca and David Henrie as the children of Ted Mosby, with narrator Bob Saget (rest in peace) overheard but never seen, Kim Cattrall appears in the flesh as older Sophie, living her best life in her fancy and futuristic 2050 apartment. (Her son is heard but not seen via her fancy and futuristic home phone system.)

A huge factor in the original series’ success wasn’t the emotional stakes of Ted’s quest for love, but the cleverness of the writing, which played with genre, made surprising connections between storylines, and layered in countless inside jokes that helped the show evolve into its own storytelling universe. The four episodes provided to critics have some potential but not on that level; one has to respect the balls of doing a completely straight-faced “did not”/”did too” gag in the year 2022, but it’s not exactly cutting-edge. 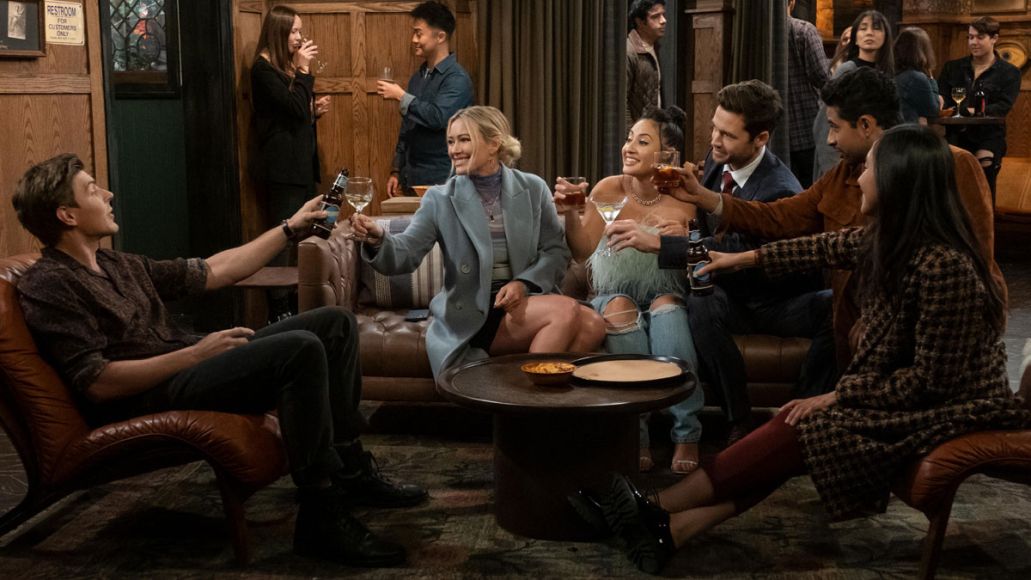 How I Met Your Father (Hulu)

In the Year 2022… How I Met Your Mother sprang into action with a lot of momentum, with the pilot focusing on how his best friends’ engagement leads Ted Mosby (Josh Radnor) to decide that he’s ready to find the right girl and settle down. (Spoiler alert: It takes nine seasons for him to do so.) In the case of Father, 2022-era Sophie just wants to go on a good second date, after having experienced 87 bad Tinder dates, and is thus keeping herself open to all the possibilities life has to offer.

An ensemble rom-com like this lives or dies on its cast and character development, and after screening the four episodes made available for critics, there’s reason to be concerned about Father. Not because characters are underdeveloped, exactly — instead, every character of the Father ensemble has exactly one more quirk than strictly necessary, at least for this stage of the show’s life. And it’s a large ensemble, with six main characters introduced in the first episode, plus some recurring folks.

And One of These People Could Be the Father! This isn’t to say that a good TV character should get two traits maximum, but that the pilot is pretty clunky, just due to the cavalcade of introductions that are required. For example, Jesse (Christopher Lowell) is a musician/music teacher/viral celebrity thanks to a failed wedding proposal being captured on video.

On an individual basis, across the first four episodes each actor manages to find their moments to shine, with Suraj Sharma as newly engaged bar owner Sid and Tien Tran as Jesse’s adopted sister Ellen (who also happens to be a recently divorced lesbian who left her literal farm behind to move to the big city) really standing out.

How I Met Your Father Review: Hulu's Sequel Series Has Some Scraps of Potential