The Pitch: At the end of Raised by Wolves Season 1, when last we saw the fledgling human (and android) remnants on the far-flung planet of Kepler-22b, they were scattered to the four winds. Mother (Amanda Collin) and Father (Abubakar Salim) lay down their lives to send the mysterious snake-like creature Mother birthed last season into the planet’s core, only to come out the other side on the planet’s more habitable tropical zone.

Six months pass, and they’re eventually recovered and repaired by a robust colony of Atheists that’s since set up shop on the planet, led by a mysterious AI called The Trust that promises to hand the reins over to humanity as soon as they’ve sufficiently progressed.

Soon reunited with Mithraic defector Sue (Niamh Algar) and their crop of children, including native-born Campion (Winta McGrath) and the Mithraic children they “adopted,” Mother and Father believe they may have found the proper place for their children to live.

But integrating their family into a larger semblance of civilization brings its own set of problems: The Trust’s motivations are as inscrutable as its orders are absolute, making for a community tinged with frustration at its authoritarian control and the arrival of this new blended family.

Mother and Father’s lingering rifts from Season 1 remain, as do the Mithraic children’s mixed loyalties to their adoptive parents and their native religion. What’s more, atheist-turned-Mithraic madman Marcus (Travis Fimmel) is still out there, now fully mad with prophetic vision and seeking his own converts to glorify Sol’s light. And don’t forget the floaty space snake.

Gimme Shelter: Raised by Wolves was one of 2020’s biggest surprises (well, one of the surprises we liked: hi, COVID), a smart, elegantly-rendered and thoughtful bit of Golden Age sci-fi that continued producer Ridley Scott’s penchant for exploring the limits of artificial intelligence, and where that collides with religious dogma and the existential questions of our place in the universe.

What’s more, it was weird as hell, with smiling robots making dad jokes and turning into banshee-like murder machines, respectively. It’s the kind of work that feels like a lost paperback from the 1960s, written by a bearded fortysomething philosopher in a tweed jacket who talked about peyote way too much. 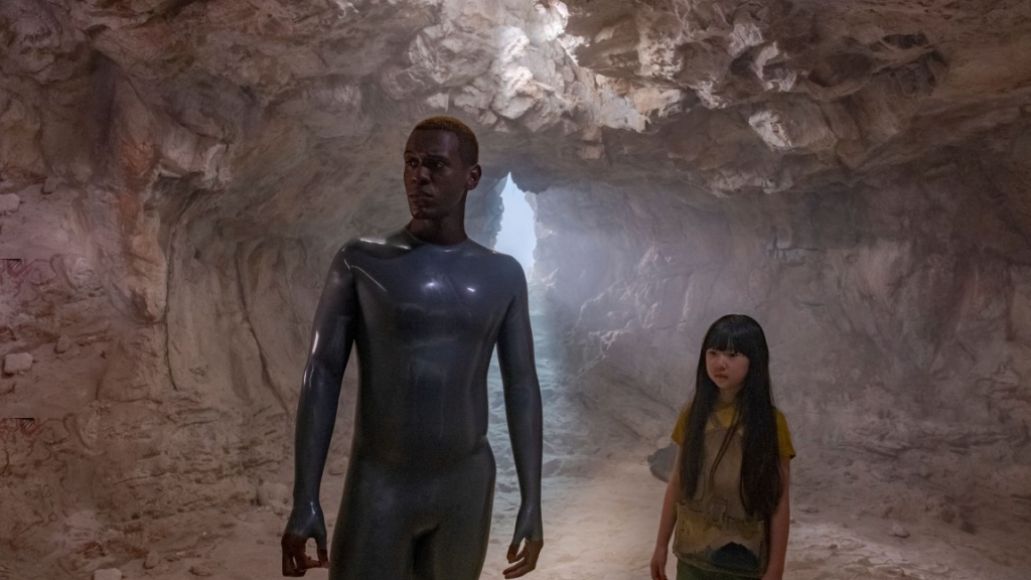 Season 2 continues that fine tradition, widening its scope but still drilling down on the characters that matter. A six-month time jump is a big risk, especially considering how difficult it can be to keep track of the myriad characters and complex mythology undergirding the history of humanity’s holy war in the far future, and how androids and this mysterious new planet fit into it.

But apart from a fairly clumsy beginning (including reams of exposition from one character or another, including the enigmatic Trust), Raised by Wolves hits the ground running in Season 2, laying the groundwork for the conflicts to come.

As always, the show’s presentation is pristine; Taboo and Pennyworth cinematographer Mark Patten takes over for regular Scott collaborator Darius Wolzski and brings some much-needed color to the proceedings with the warmer oranges and greens of the tropical zone that serves as the show’s major new setting.

Granted, the oppressive look of the show still presents some problems: the show persists in shooting so many scenes in a bleak, overcast day-for-night that leaves everything looking so grey it tires your eyes out to look at. But this new environment shakes that monotony up capably, with tall alien grasses and acidic seas that threaten to eat you alive.

Raised by Wolves Stays Weird and Gets More Intimate in Season 2: Review