The Pitch: For those familiar with the work of 21 Jump Street and The Lego Movie directors Chris Miller and Phil Lord, there are a few constants, a major one being their talent for taking a premise and making it simultaneously very clear and simple and also deceptively complex. Apple TV+’s The Afterparty is a perfect example of this, presenting itself initially as a fairly straightforward murder mystery out of the pages of Agatha Christie, with Tiffany Haddish in the Hercule Poirot role.

On its own merits, that’s an idea that would be enough to inspire interest, and then Miller (who created the series and directs every episode; Lord serves as an executive producer) adds an additional layer: Every episode, which focuses on one potential suspect’s version of events, also utilizes a different genre of entertainment to tell its story, from rom-com to musical to animation to thriller.

Heap on top of that one of the more exciting comedy ensembles assembled in recent memory, featuring Haddish, Sam Richardson, Zoë Chao, Ben Schwartz, Ike Barinholtz, Ilana Glazer, Dave Franco, Jamie Demetriou, and John Early, and there’s a ton to recommend the series as an early favorite of 2022. Even if this review does contain two caveats.

A Good Murder Mystery Needs a Victim… …and the victim, in this case, is Xavier (Franco), an obnoxious pop music star we first meet falling to his death from his luxurious coastal mansion.

Upstairs, inside the mansion, are a bunch of his former high school classmates who were just attending their 15-year high school reunion, including Aniq (Richardson), who was hoping to reconnect with his teenage-era crush Zöe (Chao), and Yasper (Schwartz), who’s hoping that Xavier might lend him some of his music industry success.

So while Detective Danner (Haddish) gathers the stories of those who might have an answer to who killed Xavier, Aniq and Yasper are doing their own investigation into the night’s events — though everyone, including them, is a suspect. 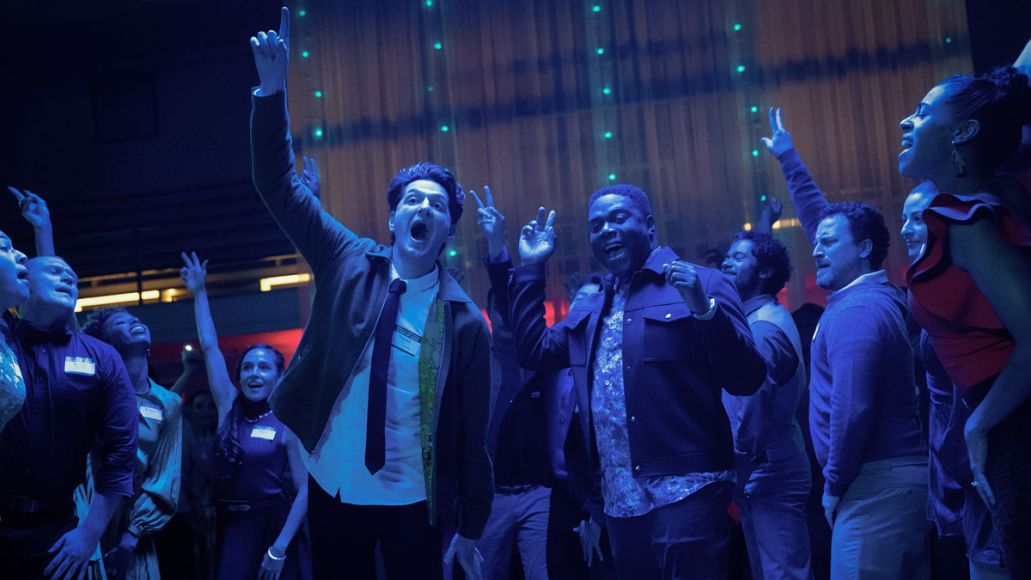 The Genre Game Is Afoot: As mentioned before, each episode not only spotlights a character but tells their story through a unique genre, each of which Miller captures pretty nimbly. These experiments of style don’t overwhelm each episode, thanks to the framing device of the present-day investigation happening in each episode, but do make a lasting impression, to largely positive results.

The issue with the genre experimentation is that sometimes it’s a strong choice that does a great job of reflecting back upon the story and characters — for example, Episode 2 spotlights Barinholtz as Brett using the framework of a modern action movie (Vin Diesel is, ahem, an influence on his performance). It’s a strong choice that highlights just how Brett perceives himself in stark contrast to the reality of his life (which is not quite so action packed).

Overall, the approach is a fun choice that elevates The Afterparty above other mystery series of its type, on the basis of sheer originality, and it rarely holds back any of the actual storytelling. There are instances where the game is less effective, and that’s either because the genre being invoked is a bit too generic to really read properly, or because it’s not as connected thematically to the actual character story being told.

These occasional moments stray over the line into gimmick, but again, they’re only occasional. And if they’re the price of getting to see a full-blown all-cast musical number or an animated descent into a character’s psyche, then they’re worth it.

The Afterparty Review: Apple TV+'s Comedic Murder Mystery Might Be the Most Inventive TV Show of 2022 (So Far)