There are truly few artists as big as Bad Bunny is right now, and depending on who you ask, he might just be the biggest.

Hordes of people descended upon Denver’s Ball Arena on Wednesday night (February 9th) for the opening date of the “El Último Tour Del Mundo” — his first tour since his album of the same name became the first Spanish-language album to top the Billboard 200, and the first since the onset of the pandemic.

Traffic clogged roadways, people sold t-shirts up to a mile away, resale for decent seats ran into the thousands and lines of people wrapped around the building, all in anticipation of the Latin superstar.

The energy stepping inside the arena was palpable, and proud — an earnest reflection of the many attendees’ thoughts on seeing the boy who came from humble beginnings in Puerto Rico now selling out arenas (and later this year, stadiums). If they were rooting hard before, they were rooting even harder now. Puerto Rican flags dotted the arena like placards on a well-decorated mantle, and a DJ spun reggaeton that reverberated from the speakers, riling up the crowd with the likes of Karol G, Don Omar and Rauw Alejandro among others. 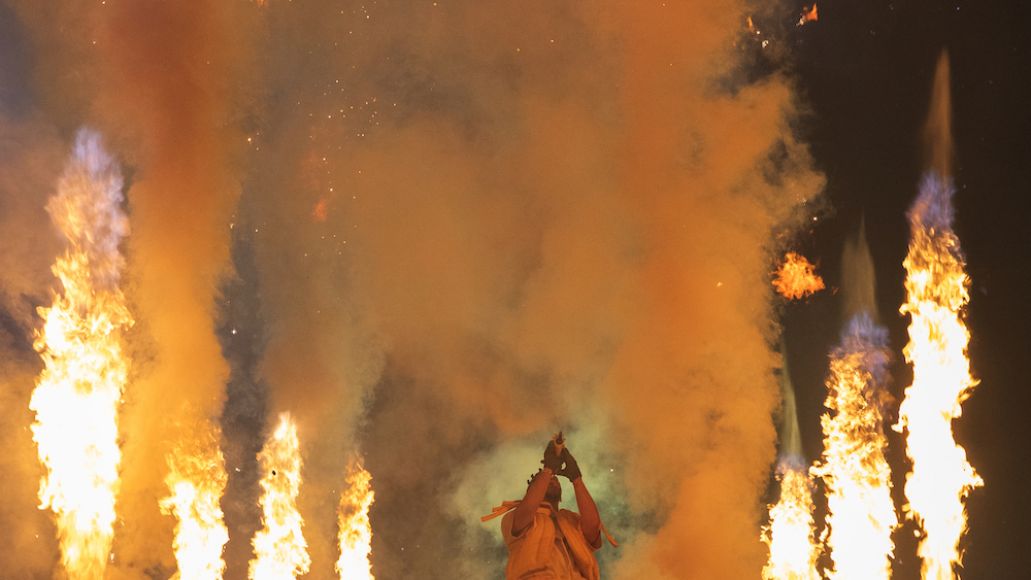 Aware of the full-fledged madhouse taking place outside of the venue, Bad Bunny took his time before hitting the stage, but when he did, a little after 9:30 p.m., he did so on eighteen wheels. An unmissable semi-truck took the place of a stage, rolled through the barricaded opening on the floor, and proceeded to open and reveal Bad Bunny rising to the masses congregated before him with a skull microphone in hand.