The Pitch: You might think you know this story… but you don’t. The Penny Marshall film A League of Their Own, celebrating its 30th anniversary this year, was a landmark production as well as a damn great sports movie, chronicling the inaugural season of the All-American Girls Professional Baseball League, despite the 1943-era sexism that had men chanting from the stands, “Girls can’t play ball!”

As groundbreaking as the original film was, 1992 was a long time ago. So in creating a new take on A League of Their Own as a TV show, co-creators Abbi Jacobson (Broad City) and Will Graham (Mozart In the Jungle) have effectively made a remix of the original film, fully centered in the underrepresented voices that, in the movie, only lurked at the edges of the frame.

The story is still focused on how in 1943, an eclectic group of women was brought together to form the AAGPBL, with the narrative centered around the Rockford Peaches’ quest to win the league championship. But with eight hour-long episodes to explore these womens’ lives and love of the sport, there’s more opportunity to explore the nuances of these characters, and more importantly explore the topics that a PG-rated studio picture from the ’90s wouldn’t have touched.

Batter Up, Hear That Call… There are actually enough twists to the plot of League Season 1 to make this reviewer wary of saying too much, but the series kicks off with aspiring ballplayer Carson Shaw (Jacobson) literally running away from home to attend tryouts for the league. (Yes, the scene features her running for the train à la Dottie and Kit in the film — just one of many homages interwoven into the show.) There, she meets the people who will eventually form this new version of the Rockford Peaches, with Casey “Dove” Porter (Nick Offerman) showing up later to serve as coach.

Carson’s reason for wanting to leave home and join the team is simple on the surface: She loves baseball. But her decision also happened to coincide with her receiving news that her husband is about to return from the war, and her realization that she’s looking for something that’s been missing from her life. What that is, she isn’t totally sure about, but except it might involve her attraction to one of her teammates… And that’s literally only half the story.

The Time Has Come For One and All… So the closest the movie came to acknowledging the existence of queer people was Rosie O’Donnell as a butch player (who nonetheless had a boyfriend back home). And as Consequence explored this July, the only notable character of color was the silent Black woman (played by an Indiana softball player named DeLisa Chinn-Tyler) who threw the baseball back to Geena Davis.

League the series includes nods to both of those touches: O’Donnell makes some memorable appearances in the back half of the season, while aspiring Black ballplayer and Rockford resident Max (Chanté Adams) is introduced in a scene that deliberately mimics the DeLisa Chinn-Tyler scene. 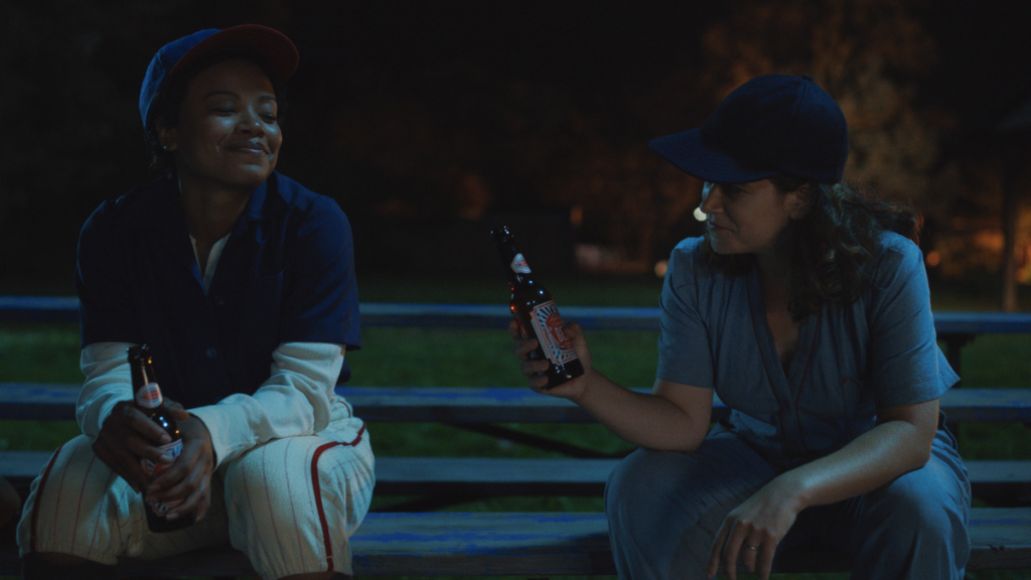 A League of Their Own (Prime Video)

A League of Their Own Review: The Series Adaptation Remixes the Classic Film From Overlooked Points-of-View