The Pitch: Violence has shaped much of Mike Tyson (Trevante Rhodes)’s life. Growing up in the Brownsville neighborhood of Brooklyn, Tyson dealt with brutal beatings from bullies as often as he received and witnessed verbal and physical lashings at home. Fighting back seemed to be the easiest solution to the hate and hurt he faced, and the bloodier and harder his blows against his peers got, the stronger his determination to make a name for himself became.

After a few stints in juvenile detention, a teenage Tyson got the chance to take his street brawling to the ring with the guidance of renowned boxing trainer Cus D’Amato (Harvey Keitel). Tyson’s prolific wins early in his burgeoning career earned him fame and wealth, launching the wunderkind from downtrodden obscurity into the bright and shiny American cultural spotlight. D’Amato even went as far as to act as a surrogate parent to the fatherless Tyson, a meaningful gesture were it not for D’Amato’s irony-free insistence that he’d help turn Tyson into “a beast” and “a monster.”

As Tyson continued to embrace his celebrity lifestyle, a turbulent marriage to TV star Robin Givens (Laura Harrier) and a credible rape allegation from beauty pageant queen Desiree Washington (Li Eubanks) quickly upended his momentum. Boxing promoter Don King (Russell Hornsby) stepped in to support Tyson in averting these crises, but his own opportunistic agenda created even more financial and personal issues for the prizefighting champion.

Told across eight chapters in the Hulu miniseries Mike, Tyson’s journey is a tragic, all-too-familiar portrait of unresolved trauma, the painful pressures of fame, and how the intersection of the two reinforce an unrelenting cycle of self-destruction and hubris.

An Automatic KO: Collaborating for the second time with I, Tonya screenwriter Steven Rogers, filmmaker Craig Gillespie’s newest directorial undertaking, Mike, adapts the life of infamous boxer Mike Tyson, spanning from his upbringing in the mid-70s to the late 2010s. The result is a thin and haphazard drama that does a disservice to the talent of its well-cast lead, and flattens the nuances behind Tyson’s complex background and tumultuous history.

Like with Gillespie’s other unauthorized dramatization Pam & Tommy, Mike stirred controversy from Tyson himself, who lambasted Hulu for “stealing my story” and confirmed plans to produce a show of his own with Jamie Foxx playing him. Even without Tyson’s creative involvement, Mike barely makes a dent.

Right from the start, the limited series seems totally uninterested in interrogating the inner lives of its characters, instead constantly repeating information about them via voiceover as if worried the audience’s attention will wane and speeding through exposition like it’s in a rush to get to the next part. Along with its obnoxious fourth-wall breaking and a shoddy structure that hopscotches around time and place with careless abandon, Mike handpicks tropes from every celebrity biopic of the past decade and blends them into episodic mush. 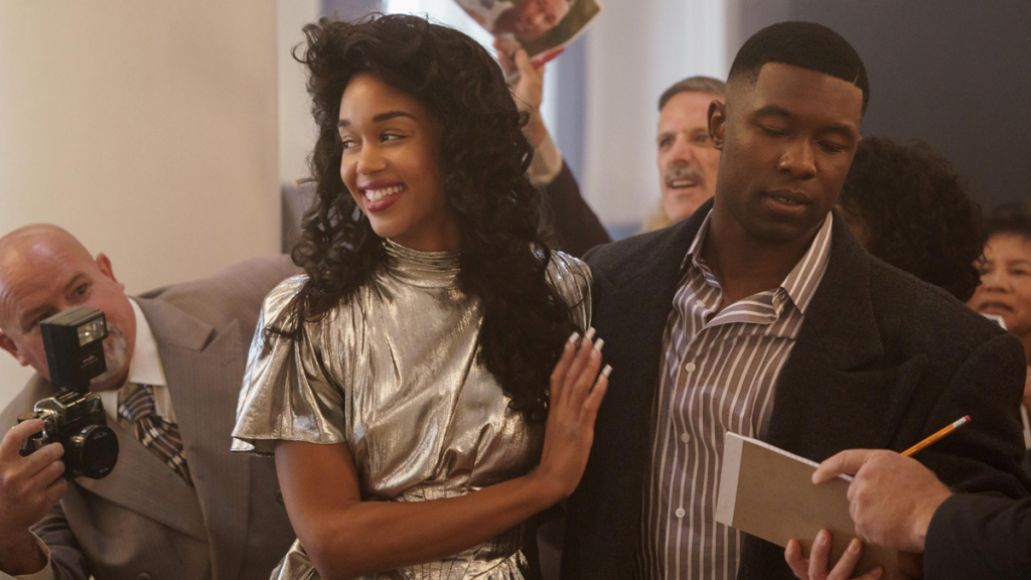 Sound and Fury, Signifying Nothing: Despite Tyson’s criticisms, it’s still possible to take artistic liberties and produce a thematically rich tale out of how race, class, and gender affected his status as a young Black male athlete in America. Take, for example, Michael Mann’s commanding depiction of boxing legend Muhammad Ali during the social upheaval of the ‘60s in 2001’s Ali. Or Scott Alexander and Larry Karaszewski’s compelling 2016 miniseries The People vs. O.J. Simpson, which effectively captured the multifaceted cultural scope of football star O.J. Simpson’s 1994 trial.

With Mike, however, Gillespie and Rogers simply apply the same method they used for I, Tonya, reconciling Tyson’s contradictions as both an abuser with material power and a victim of circumstance to sensationalist, slapdash effect.

The first crucial mistake Mike makes is having each episode feature cutaways of an adult Tyson recalling details from his difficult childhood and relationships to an auditorium filled with nameless, faceless spectators. This blunt framing device — of Tyson addressing an anonymous audience, speaking directly to the camera, and gesturing at the slideshow of photos behind him — technically riffs on Undisputed Truth, Tyson’s one-man show from 2013, but ultimately stands as a lazy and overbearing attempt to immerse us in his struggles with the limelight.

Such a heavy-handed style might sort of be the point, an aptly abrasive way of emulating the thrust of Tyson’s experiences. But without letting the images speak for themselves, Mike constantly undermines itself with self-reflexive commentary, not letting its most pivotal beats a chance to breathe without some sort of meta interjection.

From the excessive narration and the slo-mo imagery to the exhausting camerawork and the on-the-nose soundtrack, Gillespie’s elaborate Scorsese cosplay is about as off-putting and clumsy as the writing’s forced levity and allergy to subtext.

Almost every single dramatic moment is spelled out, to the point where you could anticipate from a mile away any given scene you’d expect to see from a work of this genre. Insert a raunchy montage of Tyson’s sexual exploits here, throw in a scene of Tyson getting taken advantage of by King or D’Amato there, add in a moment where a close family member tells Tyson that he’s being mistreated, and voila, you have your biopic!