The Pitch: Irwin M. “Fletch” Fletcher (Jon Hamm), an investigative journalist of some repute, arrives in Boston to help his lady friend Angela (Lorenza Izzo) retrieve some of her father’s paintings from an eccentric art dealer (Kyle McLachlan).

But before he can unpack his bags, he finds a dead body in the apartment he’s borrowing. Pegged by two homicide detectives (Roy Wood Jr. and Ayden Mayeri) as the primary suspect, Fletch has to clear his name, secure the missing artwork, and fend off the advances of Angela’s stepmother (Marcia Gay Harden).

Cards on the Table Time: Since he broke into the global consciousness through his still-outstanding work as morally bankrupt ad man Don Draper in AMC’s Mad Men, Jon Hamm has seemed content to serve as a utility player: For the better part of 15 years, he has taken on bit parts and juicy character roles in films and TV series, big and small.

Or it could be that he’s been lying in wait for the perfect gig, as he’s already proven he can win awards as a conflicted, soul-searching antihero. When does he get the chance to truly combine his unholy charisma with his roguish comedic chops and Gene Kelly-like physical grace?

Hamm’s moment arrived when he took on reins of the long-gestating efforts to bring the character of investigative reporter Irwin M. Fletcher aka Fletch to the big screen. It’s an idea that has bounced around Hollywood for ages with Scrubs creator Bill Lawrence and Clerks director Kevin Smith taking a crack at it, and names like Zach Braff and Jason Sudeikis considered for the titular role.

Hamm is both producer and star of Confess, Fletch, the wonderful reboot of this franchise landing in theaters and on demand this week. The gents who have tried to bring Fletch back to life, following the hideously misguided 1989 Chevy Chase effort Fletch Lives, likely could have done fine work, but Hamm slips these dual roles on like a broken-in Lakers cap.

On screen, Hamm is as loose as he’s ever been, navigating the twists and turns of the unfolding murder mystery with a knowing grin and a ready quip. No matter if he’s navigating a Vespa through the streets of Rome in an early scene or taking a punch from Angela’s ex, Fletch looks like he’s having the time of his life, because he’s constantly one step ahead of everyone else.

The rest of the cast responds accordingly, raising their game to his level. Though there’s still a mystery to be solved, it’s a blast to watch Hamm banter with Wood throughout and to trade insults with old buddy John Slattery, on hand to play Fletch’s former editor. 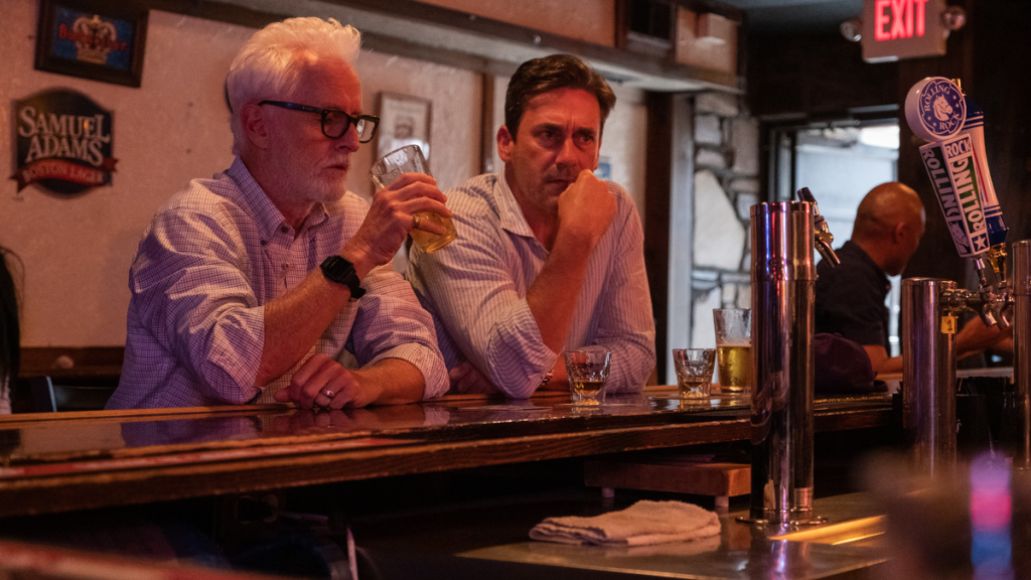