[Editor’s note: The following contains spoilers for The Lord of the Rings: The Rings of Power, Season 1 Episode 2, “The Great Wave.”]

Because of the huge amounts of secrecy surrounding The Lord of the Rings: The Rings of Power throughout its production, star Cynthia Addai-Robinson tells Consequence she didn’t know what role, specifically, she was auditioning for during a “very long and up-and-down process, to eventually get to be a part of this amazing series.”

But once she knew a little more about Queen Regent Míriel, and the character’s place in the lore of J.R.R. Tolkien’s epic fantasy universe, “I was very, very excited to get the opportunity to play a character that has a really interesting backstory,” she says. “It was also a chance to do something I felt like I never really done before in anything else that I’ve worked on, so that’s always great catnip for any actor.”

Addai-Robinson’s filmography is pretty stacked, with recurring roles on shows including Power, Chicago Med, Spartacus, and Arrow. But this is the first time she’s playing a Queen. Well, a Queen Regent, to be exact. In Episode 4 of The Rings of Power, “The Great Wave,” Míriel is the acting ruler of Númenor, and knows that the arrival of Galadriel the elf (Morfydd Clark) means a prophecy about the tragic fate of her kingdom is about to start coming true — something she has to rally her own people to accept, as the White Tree of Númenor’s petals begin to fall.

The Rings of Power isn’t the only project Addai-Robinson has worked on recently — coming out in November is The People We Hate at the Wedding, an Amazon Studios film also starring Kristen Bell and Allison Janney.

“It’s the kind of thing that I’ve been really hungry to be able to get to do, because I’ve, in recent years, played very serious characters and this was just something that felt different and new for me,” she says. “And, right now, I’m just excited to be part of putting out stories that just have a little bit of levity and lightness — these are still dark and heavy times, and as much as you want to be part of works that examine those dark and heavy times, it’s also equally important to just put out things that make people smile and laugh, and even cry in a happy way.”

But in the meantime, The Rings of Power still has its hold on her — which works out because, she says, “I definitely subscribe to the ‘variety is the spice of life’ philosophy.” In the interview below, transcribed and edited for clarity, Addai-Robinson goes into detail about some of the practical versus digital filmmaking on display, whether she sees any topical resonance in the show’s themes, and why she loves being a part of sci-fi and fantasy tales.

So I want to ask a couple of practical questions about Episode 4, mostly because I’m very intrigued by the production process on this — it feels like so much was really there with you on set, but on the day you shot the opening sequence, the dream sequence with the big flood, were there actual live babies you were holding on set?

I was holding a live baby. Very, very delicately. And, yeah, it’s interesting, because I do remember that day and obviously when you’re working on a big set, and you have all these elements around you, you want to use as much of the practical things that are actually there, the people who are there, the setting that’s there. And then you have what I like to consider movie magic, the elements that you can’t see on the day, that you just have to imagine in your mind’s eye.

But for the viewer, they get that perfect marriage of those two things. I think the most impressive CGI is the kind of CGI that when you see it in the practical setting, it really just feels seamless. But my memory of the filming of that sequence was just being blown by a giant fan and a combination of a real, beautiful baby and a few baby dolls for safety’s sake.

I’m trying to even remember how many babies were there, but you know, again, it is movie magic. So you maybe have two or three babies, and, again dolls or props, and you’re doing it in such a way that the intended effect is that it feels real and seamless, with the safety of the babies obviously the most important as well. 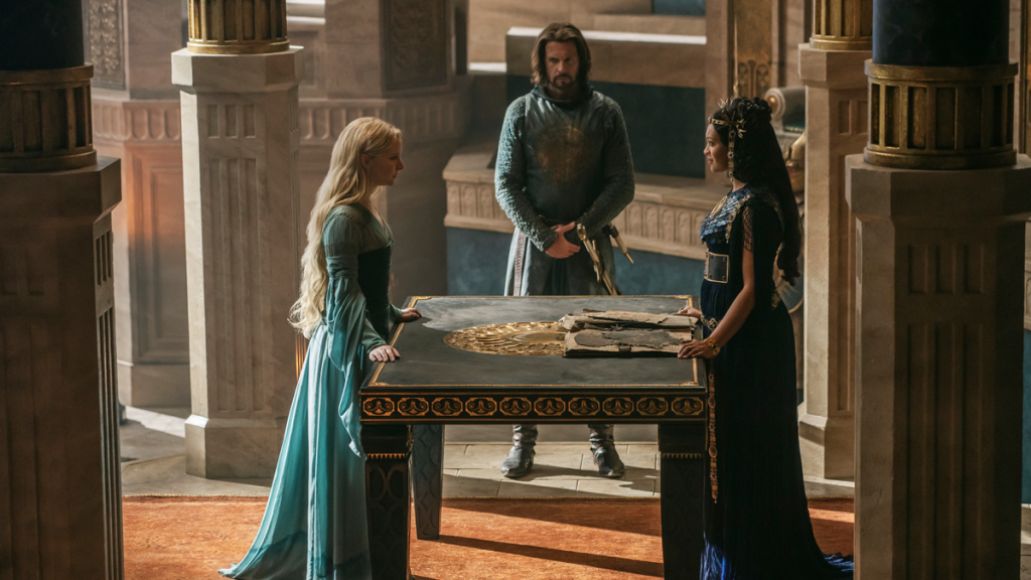