The Pitch: Alice Warren (Florence Pugh)’s life looks perfect, living as she does in a 1950s desert paradise called Victory. She’s got a beautiful home to take care of, her husband Jack (Harry Styles) is loving and (ahem) very attentive, her friends are a gas, and as Victory Project founder Frank (Chris Pine) keeps saying, she and her fellow wives are helping their husbands change the world with their mysterious work.

But sometimes, Alice suspects that there’s something going on that no one talks about, perhaps connected to the strange hallucinations she can’t shake, or how a former friend (KiKi Layne) has become moody and isolated following the loss of her son, or just a growing sense that someone — everyone, maybe — is lying to her…

At Least No One Was Dead the Whole Time: Director Olivia Wilde’s sophomore film is a much more ambitious effort than the very charming Booksmart, a beautifully made little thriller that primarily suffers from the burden of its premise. For the type of narrative with which Don’t Worry Darling is playing dates back to the era in which it’s set (which is to say, it’s decades old at this point), and at this point, releasing a movie like this in a culture that’s seen too many Twilight Zone episodes and M. Night Shyamalan movies just means that the audience is too aware of the shoe about to drop.

But what saves the film is the truth of said shoe, which is hard to discuss without spoilers, but deserves to be respected for just how nasty it is. Katie Silberman’s script keeps things very oblique, relying more on scattered distinct details than vague generalizations to give just enough information to understand what’s happened. But once you do get an impressionistic sense of the truth’s full scope, it sticks with you, especially given its lingering unanswered questions.

Keep Calm and Carry On: Florence Pugh is only 26 years old, with her earliest acting credit going back to 2014, but in that time she’s quickly ascended to the ranks of stardom, having carried a number of other films prior to this one and thus bringing to the screen a natural confidence in her work. She’s captivating as ever here, bringing the necessary raw energy to Alice’s most extreme moments.

And Harry Styles continues his forward movement as an actor with an impressive level of commitment, especially during the film’s darkest moments. It doesn’t feel like he’s quite gained the ability to completely immerse himself into a role yet — the script makes some direct accommodations for his accent (though there’s a fun additional twist on that) — but he proves adept at selling himself as a young clean-cut paragon of 1950s manhood, when not being goaded by Pine into tap-dancing for a crowd. 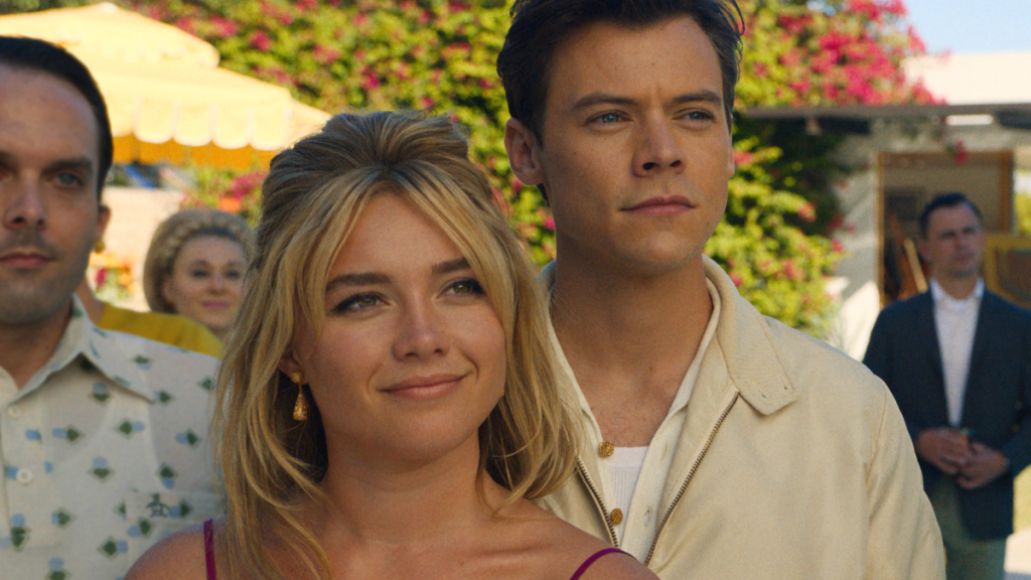