There aren’t really any other shows like Los Espookys on television right now. The HBO comedy focuses on a group of friends who create an unconventional event planning service, delivering ghoulish twists on quinceaneras and building haunted houses from scratch. But the story is bigger than that, thanks to the eclectic cast, including Bernardo Velasco, Cassandra Ciangherotti, Ana Fabrega, Julio Torres, and Fred Armisen, and the wild journeys each character is on.

In Season 2, the Los Espookys crew is back to create yet more spooky mayhem, while dealing with the repercussions of Season 1’s relationship dramas. Below, transcribed and edited for clarity, series stars Bernardo Velasco and Cassandra Ciangherotti, who play founding Los Espookys members Velasco and Ciangherotti, tell Consequence about what it was like returning for a second season, how the signature looks for their characters came about, and why their families don’t necessarily “get” the tone of Los Espookys.

Both your characters have such distinct styles, in terms of the wardrobe, hair, and make-up — what was the genesis of those looks? Were they fully-formed characters right away, or were you working with the costume designers and hair and make-up artists to create them?

Casssandra Ciangherotti: Well, I don’t know how it happened with Bernie, but we were in Mexico City and we wanted to know about this classic, dark world. So we went out searching for the darkest place in Mexico City, and I was so afraid because like every time you see someone dressed in black, you feel like they’re going to kill you, right?

And we went there and it was such a discovery because I felt so safe. I felt like everybody was like so nice and everybody was in their own world, and then I discovered that the dark world was the place I belonged to. We dressed ourselves in the dark mood, and I put a little something in my hair. By the end of the night, it was all messy. And I sent that picture to the makeup artist and she loved it. And I was like, “Yeah, this works, because it looks like a woman that was dead in the 18th century is alive again, you know?” And then I saw a picture of Carol Kane, where she was wearing something like that, and then we got Carol Kane and it was amazing.

Velasco: It was a great accident, yeah.

Ciangherotti: How was it for you, Bernie?

Velasco: Yeah, I think that talking about the look, I don’t have anything related to Renaldo. Maybe when I was younger in high school, I wore something black, but no it’s not in my life. But we have a street market, a big street market on Saturdays in one part of Mexico City, and it’s all dark metal. And when you pass by, you can see all these people, like a parade of goth people, which is crazy in the middle of the summer, these people wearing these long jackets and coats.

I really loved the look so when I started trying things for Renaldo, I was surprised how comfortable life feels with that kind of personality, you know? Mostly because I am taller with these boots that Renaldo wears, so it’s a great feeling. 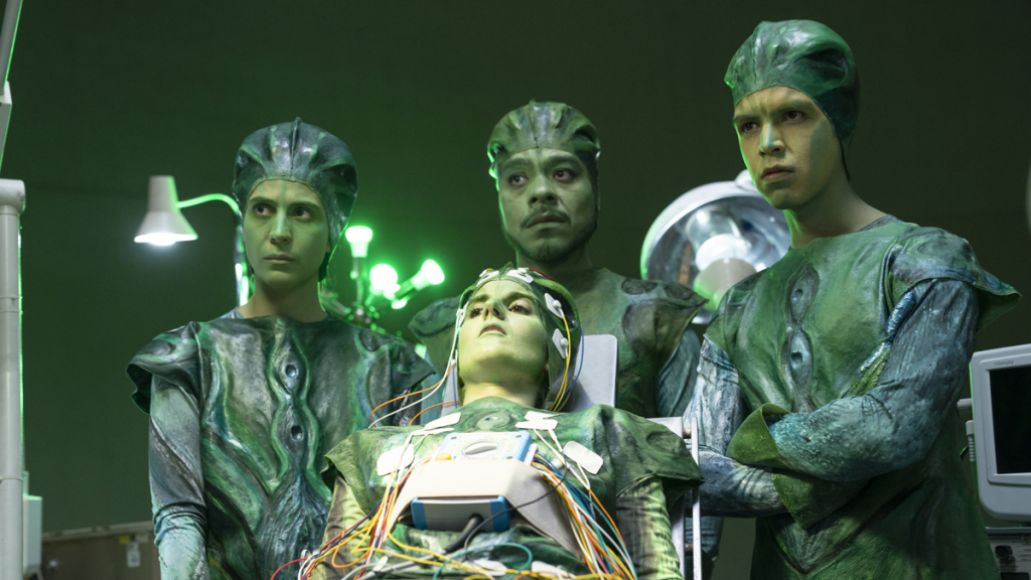