Consequence is teaming up with Modern Drummer and Yurt Rock in search of the next great funk musician. 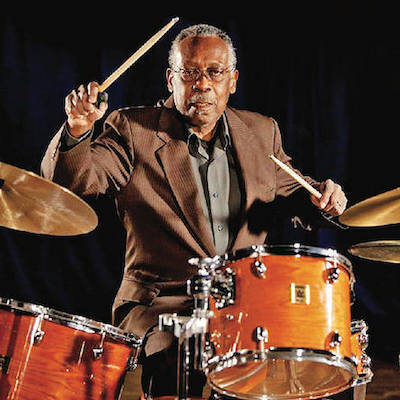 Here's your chance to prove you've got the funk by working with one of the genre's most iconic drummers: Clyde Stubblefield. As James Brown's drummer, Stubblefield is one of history's most influential musicians and has been sampled by everyone from Prince to Beastie Boys to Dr. Dre. Courtesy of Yurt Rock, contestants can download a free Clyde Stubblefield drum pack and use it to compose the next great song.

Enter your email below to download the three Clyde Stubblefield drum loops courtesy of Yurt Rock between January 24th and February 3rd.

Use at least one of the loops to create an instrumental or vocal song 1-3 minutes long. Come back here and upload your track between February 3rd and March 3rd.

Finalists will be announced on March 15th, and an all-star panel of judges and fan votes will determine the winner. Voting ends April 15th.

Show us your stuff!

One Grand Prize Winner will receive "The Ultimate Home Studio" bundle of prizes: Access to Bitwig Studio DAW, Sound Yeti's suite of Kontakt instruments, Ayaic's mixing plug-in bundle, and Yurt Rock's "The Ultimate Bundle" featuring over 145 loop and sample libraries. The winner will also receive a feature published on Consequence and Modern Drummer, as well as a one-year subscription to Modern Drummer. In total, this prize pack is valued at over $5,000!

One Runner Up Winner will receive Yurt Rock's "The Producer Pack" bundle and Sound Yeti's suite of Kontakt instruments. This prize pack is valued at over $1,000!

Every contestant who uploads a submission will also receive a free copy of Yurt Rock's "The Graybox Bundle" (a $125.00 value).

Contestants can submit their completed songs on this page between February 3rd and March 3rd. Four finalists will be selected by Consequence, Modern Drummer, and Yurt Rock on March 15th. Fans will then have the opportunity to vote on their favorite songs between March 15th and April 15th alongside an all-star panel of judges: producer Butch Vig (Garbage, Nirvana), drummer Daru Jones (Jack White), KISS drummer Eric Singer, and jazz guitarist Charlie Hunter.

Contestants will be judged on overall musicality - a combination of feel, tone, improvisation, and most importantly, funk. The judges' input will be weighed alongside the fan vote to determine the Grand Prize and Second Place winners.